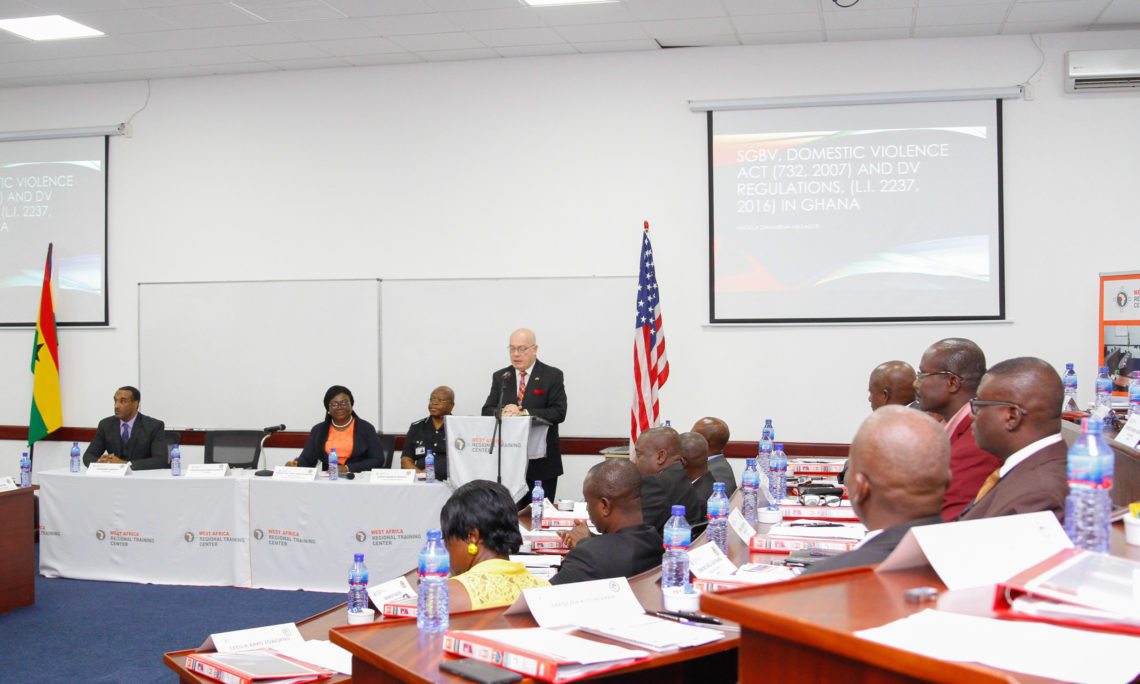 Ambassador Robert P. Jackson has challenged each and every officer of the Ghana Police Service to spearhead the fight against sexual and gender-based violence in Ghana. In his opening remarks at a training program organized to equip selected officers of the Ghana Police Service with adequate policing skills on domestic violence and gender-based violence, Ambassador Jackson expressed how proud the embassy was to be associated with the training at the West Africa Regional Training Centre. Ambassador Jackson also reminded the officers that the embassy looks forward to hearing about how lessons learned at the training will be implemented by the beneficiaries. Read his full remarks below.

Opening of Training on Policing Domestic Violence and Gender-Based Violence

I would like to begin by thanking all of you for participating in this training and giving your time and attention to this important issue. The topic you will be discussing today and tomorrow — policing domestic violence and sexual and gender-based violence — could not be more timely. Women around the world face unequal treatment every day — systemic and deeply ingrained unequal treatment. It comes in many forms: domestic violence, sexual harassment, discrimination in employment, and under-representation in politics, to name just a few. Over the past few decades, many societies have made noteworthy progress in addressing these historic inequalities.

The events of 2017, however, reminded us how much work remains. In recent months, thousands of women from all parts of American society have come forward to describe their experiences with sexual harassment and assault by men in positions of power. The hash-tag “me too” campaign swept across social media platforms worldwide, with women describing their own traumatic experiences with sexual violence. Here in Ghana, we ended the year horrified by the report of the gang rape of a teenager. If not for the assailants having the audacity to record the assault and post it on social media, we may not have even known about this incident. Far too often, sexual violence goes unreported.

The headlines of 2017 can be discouraging, but they can also serve to motivate. In 2018, each of us can contribute to addressing sexual and gender-based violence, whether it be in the home, the workplace, or on the street. You have been hand selected to participate in this training. As leaders within the Ghana Police Service, you can spearhead this fight, on behalf of all Ghanaians. You are the people victims look to when they need a safe place to escape from violence. You are the people who are entrusted with holding accountable those who commit sexual and gender-based violence. With your actions, you can make clear to your communities that this behavior will … not … be … tolerated. When you prioritize combatting domestic and gender-based violence, you set the expectation for the officers under your supervision: whether or not they serve in the Domestic Violence and Victim Support Unit, they have a responsibility to respond to domestic and sexual violence — and to support the victims.

There are many cultural and societal differences between the United States and Ghana, but there are also things we share. Unfortunately, one of them is a history of tolerating domestic and gender-based violence. Police in the United States have had to overcome biases in this area. In the past, it was assumed that violence happening in the home was a “family affair,” best left for the parties to work out within the household. Mark and Valerie Wynn will draw from their decades of experience to discuss how law enforcement agencies in the United States have grappled with these problems. I hope that you will share candid reflections about the real-world situations you face when implementing Ghana’s laws on domestic and gender-based violence. Although some challenges will certainly be unique to Ghana, I imagine many will have parallels with the U.S. experience — a lack of resources dedicated to supporting victims, overcoming societal biases, and inconsistent support from law enforcement leadership. I know that we are only now beginning 2018, but as you go through this training I’d like you to think about New Year’s Day 2019. On that day what tangible successes do you hope to look back upon? What can you do, this year, to support the officers under your supervision as they seek to help victims of sexual and gender-based violence and hold perpetrators accountable?

The Embassy is proud to be partnering with the Ghana Police Service on this training, and we look forward to hearing about how you are implementing the lessons learned in your respective commands. No society can thrive when half of its members have a precarious sense of their personal
security. Too many women still endure the uncertainty of living with a husband who thinks he has the right beat those under “his” roof. Too many girls endure unwanted touching from classmates and relatives who see their bodies as public property. They deserve to be heard. They deserve to be protected under the law. They deserve to live lives of confidence, not fear. Mark and Valerie, Thank you for taking the time out of your schedules to develop this training and to share your experiences. Thank you, as well, to the United Nations Populations Fund for its technical support and
ensuring the participation of local experts, and to the Domestic Violence and Victim Support Unit for its efforts to ensure this event is a success. And, of course, thank you in advance to you, the participants, for your time and attention during this training.