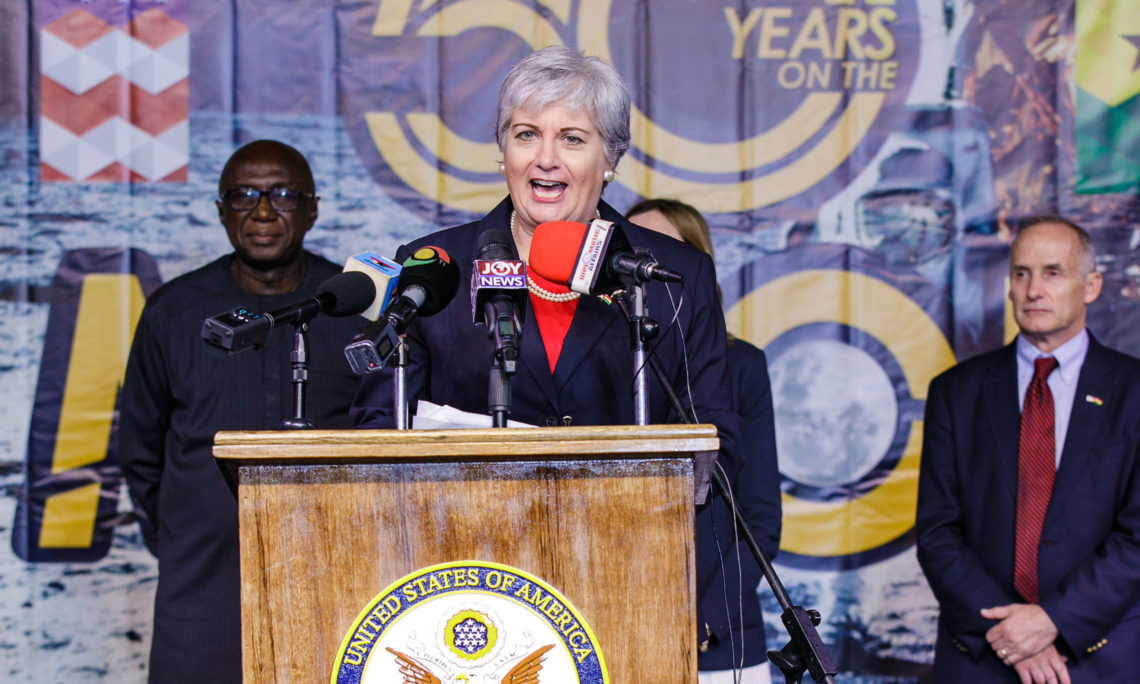 at the Independence Day Reception

Honorable Minister of Interior Ambrose Dery,
Honorable Ministers and Deputy Ministers of State,
Members of the Council of State and
Members of Parliament,
Representatives of the Security Services,
Your Excellencies and Dear Colleagues from the Diplomatic Corps,
U.S. Assistant Secretary of State for Educational & Cultural Affairs Marie Royce, who earlier today launched the Academy of Women Entrepreneurs here in Accra,
Nii Me, Naa Me, Nananom,
Religious Leaders,
Members of the media, Mission colleagues,
Distinguished Ladies and Gentlemen:

My husband John and I, and all of our colleagues, welcome you to the U.S. Embassy for tonight’s celebration of the 243rd anniversary of U.S. independence, and the 50th anniversary of humanity’s first steps on the Moon.

Before I proceed, I’d like to offer my profound personal thanks to our Mission Ghana team who organized every aspect of this evening’s event, as well as to our generous U.S. private sector partners for their voluntary contributions that made this evening possible.  You can find these partners’ logos on the banner behind me.  Thank you all very much.

Tonight, we honor the humble beginnings, dynamic present and limitless future of America.  And we celebrate our common aspirations with the people of Ghana for a future of prosperity and peace. Peace and development are mutually reinforcing, which is why I am so pleased to have Minister of Interior Ambrose Dery representing the Government of Ghana here this evening.

Honorable Minister, the United States commends Ghana’s commitment to providing a stable environment in which to raise and educate her youth.  Children’s dreams are without bounds. With the right foundation, they can dream as big and travel as far as their talents will take them.

America is a nation of dreams.  Our founders dreamt of a nation rooted in liberty, with a government designed to serve the people.  In our Declaration of Independence, Thomas Jefferson – who later became our third President – wrote that to secure the rights of citizens, “Governments are instituted among Men, deriving their just powers from the consent of the governed.”  I’m sure he meant Women as well!

At the height of our Civil War, our 16th President, Abraham Lincoln, referred to this same ideal as government “of the people, by the people, for the people.” From Jefferson to Lincoln to today, the American dream, and indeed the American strength, has been to face and overcome challenges, to strive for a perfect union, and to renew the American spirit.

We proudly draw on the talents of people who have come to our shores from all over the world.  Our national motto, E Pluribus Unum, reflects this ideal … From Many, One.

And it is people from every race, color, and creed; from every ethnic heritage; and the full socioeconomic spectrum who built America.

They are the people who harnessed electricity, developed life-saving medical technologies, and put a man on the Moon. Standing as we are here in Africa, a continent to which at least 50 million of my fellow citizens can trace their ancestry, I want to note that African-Americans have made particularly important, and (far too often) unknown or under-appreciated contributions to this history. Therefore, as we reflect on the U.S. space program, I think about Katherine Johnson, the African-American mathematician whom astronaut John Glenn personally requested to program the orbital path  of his “Friendship 7” spacecraft.

Glenn asked Johnson to double-check, by hand, the complex equations of NASA’s computers, to ensure there would be no life-threatening mistakes. He placed his life, and the success of the mission, in her hands and brilliant intellect. Because of the contributions of Katherine Johnson and countless others, John Glenn became the first American to orbit the Earth.

Today, Americans from all walks of life continue to travel. This includes American students, who enroll in Ghanaian universities or participate in exchange programs here, driven by their intellectual curiosity.

It includes Peace Corps Volunteers, who, since 1961 have come to Ghana, Peace Corps’ first country of service. These Volunteers leave their familiar homes and friends to live and work in rural areas. Then they bring the world back home.  John’s and my Peace Corps experiences forever shaped the people we became.  Like the astronauts, Peace Corps Volunteers are on their own voyages of discovery.  But even more, they’re developing friendships that will last lifetimes.  It’s noteworthy that President John F. Kennedy, who founded the Peace Corps, was also the President who first articulated the dream of putting a man on the Moon. Some people at the time thought such a dream was completely unrealistic.  But it wasn’t.

Nor are the dreams of Ghanaians unrealistic.  When we talk about assisting Ghana in her journey to self-reliance, we do not focus on the difficulties, but imagine the possibilities.

And elsewhere in America, other Ghanaians are reaching even greater heights. At NASA’s Jet Propulsion Laboratory, Ghanaian Engineer Dr. Ashitey Trebi-Ollennu led the team that designed the robotics components for the “InSight” spacecraft now exploring Mars.

In 2011, he founded the nonprofit “Ghana Robotics Academy Foundation” (the very organization that fostered Ghana’s Eastern Region robotics champions) in order to inspire Ghanaian youth to study STEM, in part by using the motivational effects of robots to connect theory with practice.

The U.S. Embassy sponsored the Foundation’s initial robotics kits, and we are thrilled with the Ghanaian teams’ great success.  Dr. Trebi-Ollennu studied aviation science after growing up near Accra’s Kotoka airport.  He had a dream, and he pursued it.  I have no doubt that, in the years ahead,  Ghana will produce more such engineers and award-winning robotics champions,  and realize its own “moonshot” vision.  To transform such dreams into actions,  Ghanaians will need to build on a solid foundation.

I was delighted this past March to visit primary-school children in the Northern Region who were participating in our “Partnership for Learning” project,  that is improving childhood reading fluency and comprehension in children’s first languages.  The American private sector is also helping Ghana lay stones along this same foundational path.  For instance, “Zipline” recently began using drones to deliver critical medical supplies including blood, vaccines, and antivenin to remote Ghanaian communities.  Zipline’s drones may not be flying to the Moon, or to Mars, but they are saving lives here on Earth.

In his 1962 speech laying out his vision for a voyage to the Moon, President Kennedy said: “Surely the opening vistas of space promise high costs and hardships, as well as high reward.  … But this country of the United States was not built by those who waited and rested and wished to look behind them, [but] by those who moved forward.” President Kennedy believed in the innovative and entrepreneurial spirit and a limitless future.  And so do we:  for America, for Ghana, and for the world.  Because we’re all in this together.

When I, in my pyjamas, witnessed Apollo 11 land on the Moon on July 20, 1969, I heard astronaut Neil Armstrong say,   “That’s one small step for man, one giant leap for mankind.”

Not a giant leap for astronauts, or NASA, or even the United States, but for all of humanity. From the lunar surface, Neil Armstrong saw the Earth, floating in a vast space, spotted with endless stars.  A fragile blue marble, without distinct national borders, that serves as all of humanity’s only home.  Therefore, as we celebrate America’s birthday and reflect on one of humanity’s greatest triumphs, I’m just as excited about our partnership with our Ghanaian friends to promote an even brighter future here.  Honorable Minister, Ladies and Gentlemen, What do I see?  I see a Ghana that is ever more prosperous, with stronger education and health care systems for her people, enjoying sustainable economic prosperity, and fully at peace. Indeed, the United States will continue to be by your side as we work together toward Ghana’s own limitless future.

Now, please join me in a toast:

To the good health and long life of His Excellency, President Nana Addo Dankwa Akufo-Addo.  May the friendship and partnership between the United States and Ghana continue to grow from strength to strength.  And may we never stop reaching for the stars.