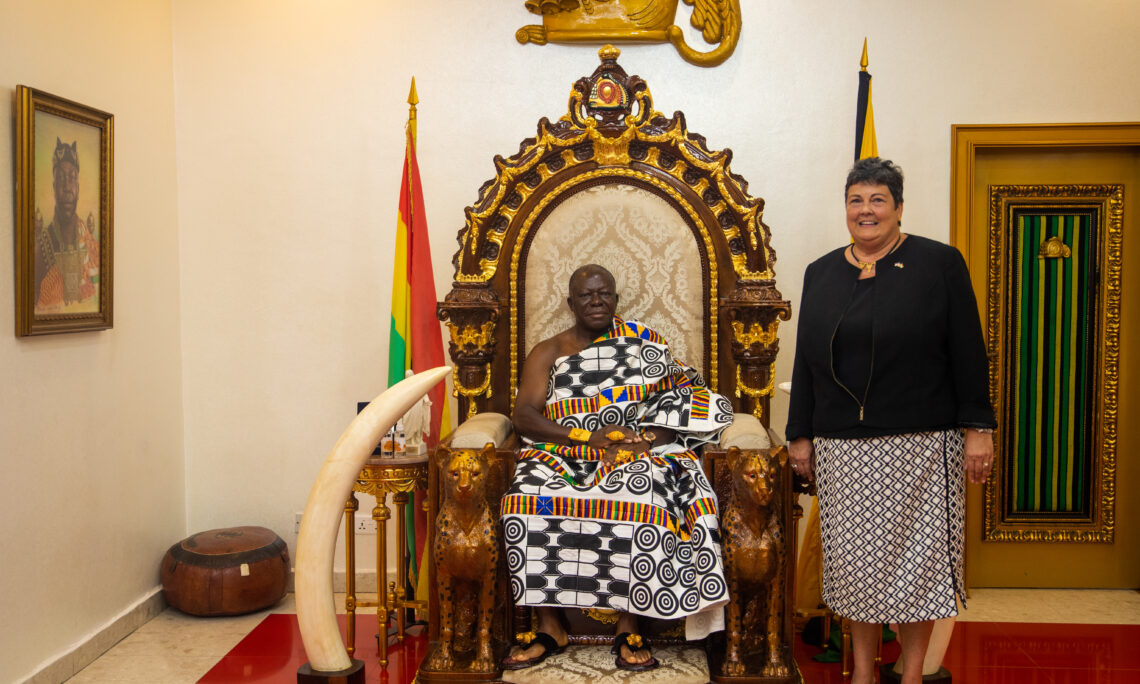 Kumasi, Ghana – During her first trip to the Ashanti Region, U.S. Ambassador Virginia Palmer met with his Royal Majesty the Asantehene, other traditional leaders, civil society, and U.S. government alumni in Kumasi.  The trip reiterated the United States’ commitment to economic development, inclusive prosperity, and accountable governance in Ghana.

“I’m thrilled to visit Kumasi, the historic capital of the Ashanti Region.  I was honored to meet the Asantehene today.  Kumasi and its people are an important priority for the United States and I’m glad to have met so many Kumasifuo.  I will be back soon,” said U.S. Ambassador Palmer during her trip.

The Ambassador met His Royal Majesty Otumfuo Osei Tutu II at Manhyia Palace.  Their discussions centered on the continuous U.S investment in Ghana’s human capital based on strong bilateral ties rooted in history and common democratic values.  The Ambassador also paid a call on the leadership of the National House of Chiefs to discuss the vital role of traditional leaders in development, prosperity, and peace.

She also met with the Ashanti Regional Minister Honorable Simon Osei-Mensah, focusing on the U.S government’s support for peacebuilding and governance, as well as promoting opportunity and development through inclusive investments in people.

At a media roundtable with Kumasi journalists, Ambassador Palmer reiterated to journalists the United States’ commitment to safeguarding press freedoms while promoting professional development for journalists.

Meeting with the local entrepreneurs during her visit to the Kumasi Hive, Ambassador Palmer underscored the importance of entrepreneurship in developing Ghana’s economy.  “Promoting inclusion and economic growth, trade and investment is one of the top priorities of the U.S. government and enhancing the skills of entrepreneurs across various sectors can boost sustainable economic growth,” said Ambassador Palmer.  Earlier this year, with the support of the U.S. Embassy, the Kumasi Hive trained more than 300 local Senior High School students with entrepreneurship skills, including design thinking, marketing, and a pitch competition.

Ambassador Palmer concluded her trip with Kumasi-based alumni of U.S. Government exchange programs, including alumni of the Fulbright Program and Mandela Washington Fellowship.