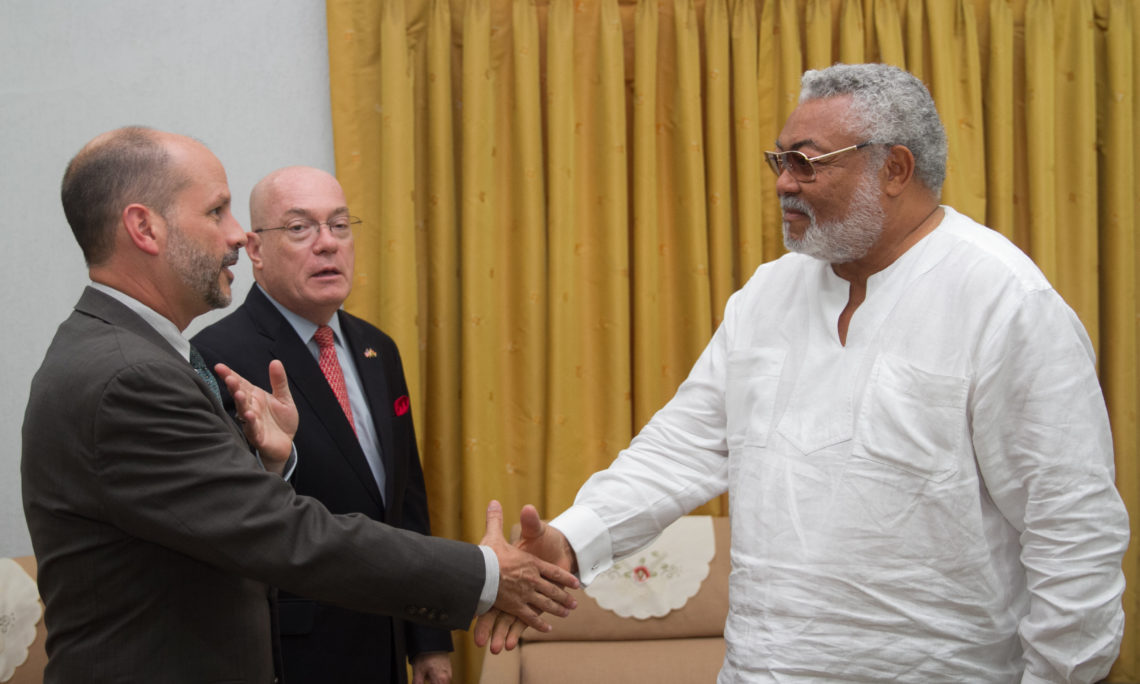 Ambassador Robert Jackson made a farewell call on the President  of Ghana, Nana Addo Dankwa Akufo-Addo on July 18, 2018, at the Jubilee house. He is leaving Ghana after a nearly three-year term, which took him to many towns and cities in all ten regions of Ghana. He also called on the three former Presidents John Dramani Mahama, John Agyekum Kufuor and Jerry John Rawlings to officially inform them of his departure from Ghana.

His farewell tour also took him to the Manhyia palace on July 19, 2018 to bid farewell to the Asantehene Otumfuo Osei Tutu II. He thanked the Asantehene for his friendship and support over the past years. Ambassador Jackson used the opportunity to also express his appreciation to traditional rulers in Ghana for their cooperation and support for our work here. He also welcomed a delegation from the Osu traditional council who came to bid him goodbye and to express their appreciation for his work in Ghana.

To crown it all, Ghana’s Ministry of Foreign Affairs and Regional Integration held a farewell luncheon for Ambassador Jackson and four other outgoing ambassadors on July 24, 2018. The sector minister, Ms. Shirley Ayorkor Botchwey commended Ambassador Jackson for his meritorious service and his interest in forging bilateral cooperation between Ghana and the U.S.

She applauded him for an excellent diplomatic career spanning over 30 years, during which he dedicated most of his time to service on the African continent. The minister described Ambassador Jackson as one of the most industrious and innovative ambassadors whose vision for Ghana-U.S. relations went beyond the ordinary day-to-day diplomacy.

Ambassador Jackson was sworn in as U.S. ambassador to Ghana in Washington, D.C., on November 30, 2015, and presented his credentials to then-President Mahama on February 3, 2016. He departs post at the end of July, 2018 to begin his retirement after more than 35 years of service to the United States. Ambassador Jackson is sincerely grateful to the people of Ghana for the warm welcome and friendship he was offered throughout his tenure as ambassador.