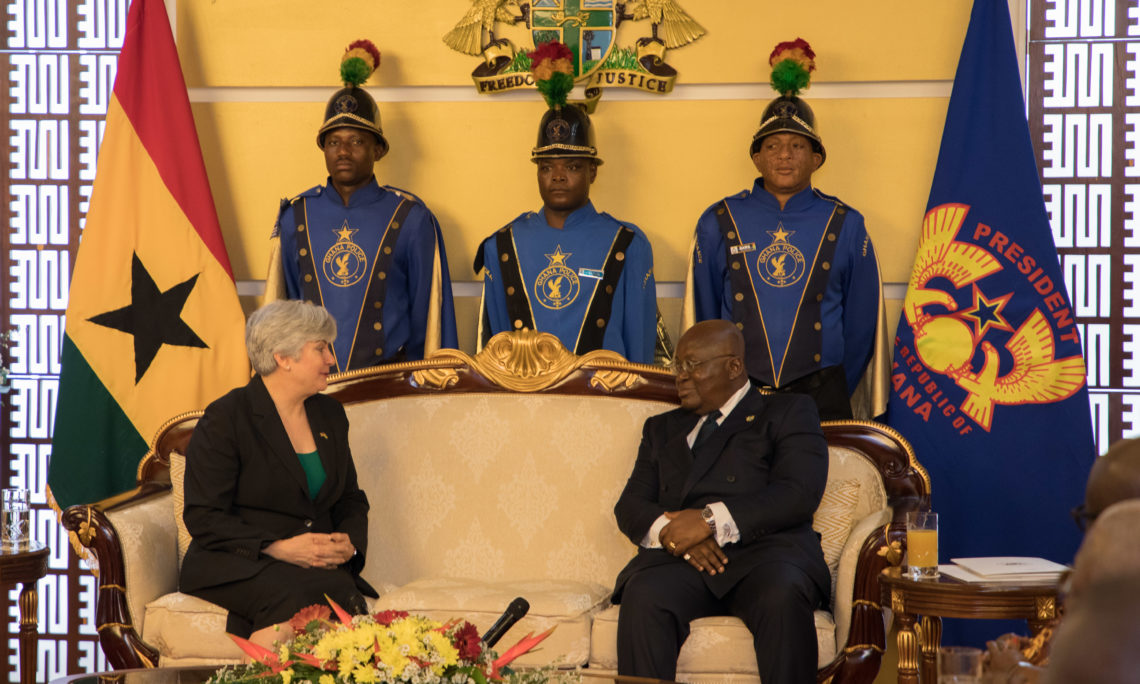 Accra, GHANA – The new U.S. Ambassador to Ghana, Stephanie S. Sullivan, presented her credentials to President Nana Addo Dankwa Akufo-Addo and has taken up her duties as Ambassador.

Speaking from the ceremony at Jubilee House, Ambassador Sullivan thanked President Akufo-Addo for the warm welcome to Ghana and highlighted the U.S. – Ghana partnership focused on advancing economic growth and trade, strengthening regional security, and improving governance.  Ambassador Sullivan expressed her commitment on behalf of the U.S. government to support Ghana’s journey away from dependence on traditional development assistance, in line with President Akufo-Addo’s vision of an increasingly self-reliant “Ghana Beyond Aid.”

Ambassador Sullivan underscored the long-standing ties between the United States and Ghana, highlighting a relationship that goes beyond policy, and spans across families and friendships forged through cooperation and exchanges dating back to Ghana’s independence in 1957, and before.

Stephanie S. Sullivan, a career member of the Senior Foreign Service, class of Minister Counselor was sworn in as U.S. Ambassador Extraordinary and Plenipotentiary to the Republic of Ghana on November 30, 2018.  She formerly served as Ambassador to the Republic of Congo (2013-2017).  Ms. Sullivan has spent half of her 32-year career in the Foreign Service working in Africa or on Africa policy in Washington, D.C.

This is Ambassador Sullivan’s second tour in Ghana.  She previously served as the Political Chief at U.S. Embassy Accra from 1997-2001.  Ms. Sullivan is very pleased to be back in Ghana.  She and her husband John Sullivan have fond memories of living in Ghana with their two sons.  Ambassador Sullivan’s early experiences in Africa were with the Peace Corps, serving as a volunteer in the Democratic Republic of Congo (1980-1983) and later as Peace Corps Chief of Operations for the Africa Region from 1994-96 in Washington, D.C.

Ambassador Sullivan graduated from Brown University with a Bachelor of Arts degree in Classics and from the National War College with a Master of Science in National Security Strategy.  She speaks French, Lingala, and some Spanish.