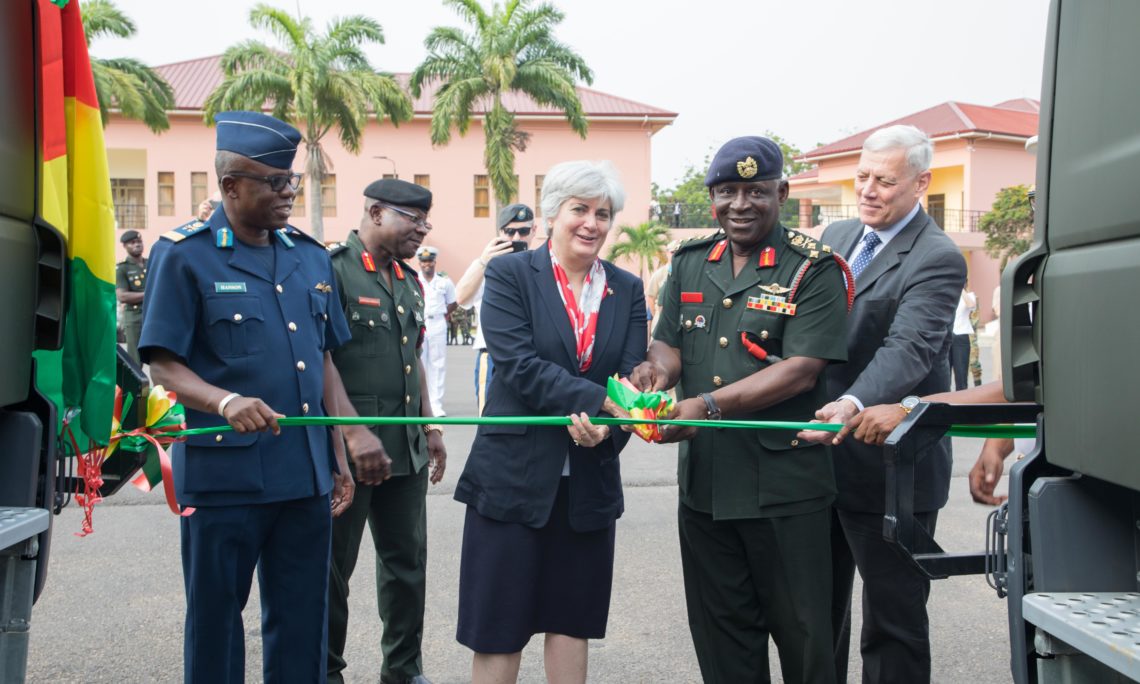 Ambassador Sullivan with Ghana's Chief of Defense Staff Lt Gen Akwa during the presentation of vehicles.

During a handover ceremony of cargo and personnel carriers to the Ghanaian Armed Forces on February 15, 2019, Ambassador Stephanie Sullivan emphasized the importance of peace, security, and good governance in promoting economic development.  She also lauded the Ghana Armed Forces for its long and professional contributions to the United Nations peacekeeping operations over nearly six decades.  “I am delighted to present these vehicles to the armed forces of Ghana, who, as the billboard on Giffard Road so proudly displays, are truly “serving Ghana and mankind” and doing your part to making your nation great and strong.” – Ambassador Stephanie Sullivan.

at Handover Ceremony of Mercedes Benz Cargo and Personnel Carriers

to the Ghanaian Chief of Defense Staff

Although many things have changed, others have not. I am impressed by the strength and growth of Ghana’s democracy, which shines like a beacon for other nations to emulate. I am also proud that this nation is one of our most steadfast security cooperation partners in Africa and the world.

Beyond that, our trade and investments have risen sharply. In the last three years alone, over ten American companies have chosen to invest in Ghana, and there are now more than 120 here. We want to welcome more

American companies to invest here, because Ghana has worked hard over time to improve its policy framework and investment climate. Ghana remains a country of enormous potential. We support a future of enterprise-driven development, in line with President Akufo Addo’s Ghana Beyond Aid and President Trump’s Journey to Self-Reliance.

We also know that peace, security, good governance, and respect for human rights and the rule of law are necessary for promoting economic development. In all of this, we salute Ghana’s Armed Forces! Ghana’s Armed Forces, as an institution, has rightfully earned global respect for its long and professional contributions to United Nations peacekeeping operations, over nearly six decades since deploying to the now-Democratic Republic of the Congo in 1960.

The Ghana Armed Forces is renowned for its defense of democratic values, and dedication to partnering with the armed forces of many nations in joint training programs, including those of the United States of America.

Before the reestablishment of our Defense Attaché Office in 1998, I recall working closely with the Ghana Armed Forces on the forerunner of ACOTA, the African Crisis Response Initiative.

I am pleased to be here now as U.S. Ambassador to present these three Mercedes Benz Cargo and Personnel Carriers to the Ghana Armed Forces on behalf of the United States of America. There is an Akan proverb that says

“When two carry, it does not hurt.”

We all know that the Ghana Armed Forces carry a lot of weight to advance regional security and international peacekeeping efforts. The contribution of these trucks is but one small gesture of how the United States is proud to partner with Ghana in carrying some of that weight…and by the looks of it, these trucks can carry a lot of weight! But in all seriousness, the United States is truly committed to strengthening our bilateral partnership in the economic, security, and governance spheres, and in support of your goals to rapidly deploy and sustain peacekeeping troops.

We thank you for welcoming our partnership efforts in several areas, such as the African Peacekeeping Rapid Response Partnership and the Global Peacekeeping Operation Initiative, which support your objectives to train and equip Ghanaian military personnel. These programs also contribute to the professional development of American service members. When our soldiers, airmen and airwomen, sailors, and Marines are trained by Ghanaians, they learn from your vast experience and professionalism. We learn from one another.

Whether it’s a young U.S. soldier visiting Ghana to exchange ideas on vehicle maintenance, dozens of troops learning from you during Central Accord at the Jungle Warfare School in Achiasi, or a group of newly promoted general officers, such as the CAPSTONE fellows present here today, the United States military significantly benefits from our enduring security partnership.

And now, I am delighted to present these vehicles to the armed forces of Ghana, who, as the billboard on Giffard Road so proudly displays, are truly “serving Ghana and mankind” and doing your part to making your nation great and strong.