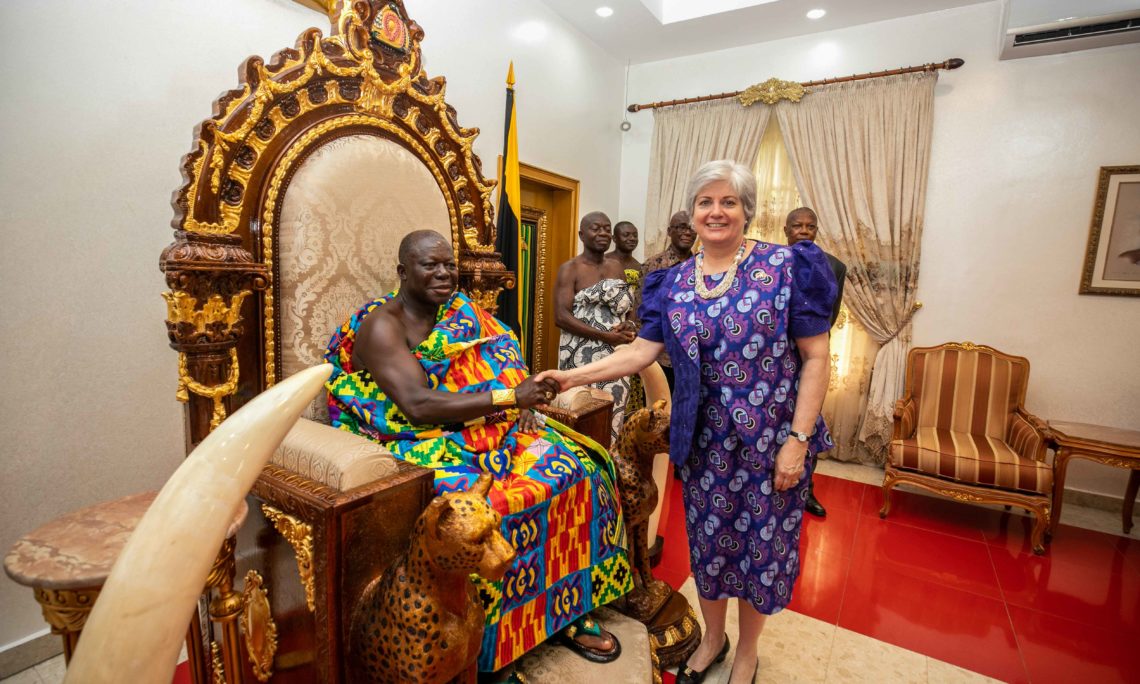 Kumasi, GHANA – Ambassador Stephanie S. Sullivan traveled to the Ashanti Region from May 2-7 to promote partnerships on health, education, good governance, and economic development between the United States of America and the Republic of Ghana.  On May 3, Ambassador Sullivan paid a visit to the Regional Minister of Ashanti, the Honorable Simon Osei-Mensah, with whom she discussed U.S. partnership programs in the Ashanti Region sponsored by the American people.  She then attended the 20th anniversary celebration of the enstoolment of His Majesty Otumfuo Osei Tutu II, the 16th Asantehene of the Ashanti Kingdom, and attended a dinner in his honor at the Manhyia Palace.

The Ambassador joined senior Government of Ghana officials and business leaders in an investment forum at the Golden Tulip Hotel on May 4, where they discussed key trends and developments in the Ghanaian economy and future partnership opportunities.  She then met Peace Corps Volunteers and thanked them for their service in the region promoting health and education, underscoring her own experience as a former Peace Corps Volunteer in the Democratic Republic of the Congo, then known as Zaire, prior to her diplomatic career.  At the Kwame Nkrumah University of Science and Technology (KNUST) on May 6, the Ambassador met with Vice Chancellor, Professor Kwasi Obiri-Danso and addressed U.S.-Ghana bilateral relations with over 200 business students.

In her remarks, she noted the longstanding U.S. interest in strengthening partnerships between American and Ghanaian academic institutions, and the U.S. commitment to encouraging more Ghanaians to study in American colleges and universities.  The Ambassador thanked Professor Obiri-Danso for KNUST’s partnership welcoming American Fulbright Scholars and Fellows, and exhorted the students to offer their own immense talents and contributions towards shaping Ghana’s economic development. Ambassador Sullivan also met with 16 students specializing in seeds at the College of Agriculture who participate in the United States Agency for International Development (USAID) Borlaug Higher Education Agricultural Research and Development (BHEARD) Program.  The program promotes greater agriculture-led economic growth and national resources management.

Concluding her trip, Ambassador Sullivan inaugurated the HopeXchange Women’s Cancer Center in Kumasi, which is sponsored by the American people through USAID.  The new medical center is a hub of collaborative research and training for Ghanaian medical professionals dedicated to the detection, diagnosis, and treatment of breast and cervical cancer, which are the two largest causes of preventable deaths among Ghanaian women.   In her remarks, the Ambassador observed that the Center’s inauguration underscores the successful partnerships the United States Government has with Ghana’s Ministry of Health, HopeXchange, the Ghana Mission Foundation of Malta, the Catholic Church of Ghana, Yale University, private sector partners, and several other leading medical universities around the world.