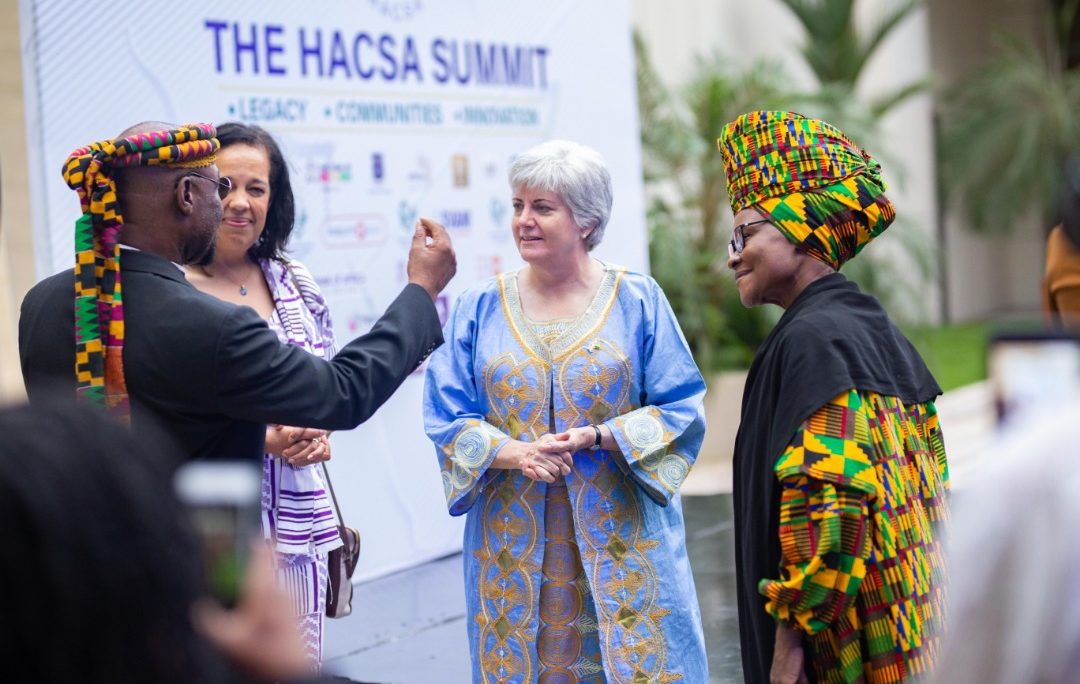 Before I start my remarks, I would like us to observe a moment of silence  in memory of American author Toni Morrison, who today joined the ancestors. A great tree has fallen.

President of the Heritage and Cultural Society of Africa.

Invited guests; Members of the media;

It is such an honor to be here with you all today for the launching of this exhibit, as part of the 2019 HACSA Summit. I’d like to offer a special thank you  to Ambassador Johanna Odonkor Svanikier, President of HACSA, for your energy and leadership in organizing this summit in this Year of Return, with the theme of: Legacy, Communities, and Innovation.

The timing of this year’s summit and exhibition entitled “400 Years On: Marine Drive Heritage Salvage Exhibition”is particularly poignant for me both personally as an American, and in my official capacity as the United States’ Ambassador to Ghana.

As you may have heard, last week we hosted the historic visit of U.S. Speaker of the House of Representatives Nancy Pelosi, joined by 13 members of the Congressional Black Caucus, to mark 400 years since the first enslaved Africans arrived in Virginia in 1619. Speaker Pelosi called the trip to the slave dungeons “transformational,” and I, despite having seen the Castles at least five times, was greatly moved to share the experience in the presence of the Speaker and so many iconic members of the Congressional Black Caucus.

Representative Karen Bass, Chairwoman of both the Caucus and the House Foreign Affairs Subcommittee on Africa, Global Health, Global Human Rights and International Organizations, called the visit a “profoundly significant trip” and added that Speaker Pelosi’s presence “says a great deal about the historical ties between our countries and reaffirms our commitment to Ghana and to the continent of Africa.”

In keeping with that commitment, the U.S. Embassy is pleased to support HACSA’s initiative that brings together a diverse group of people this week. This display of tangible artifacts of the transatlantic trade on the coast of Ghana here at the Kempinksi, as well as at the University of Ghana and Christiansburg Castle provides a springboard for initiating international dialogue.

The HACSA Summit illustrates one way in which our countries are jointly building the future as we honor and remember the past, with all of its painful and joyful lessons combined, so that we reconnect and, together, march forward.

The invitation that President Akufo-Addo has extended to African Americans and to African descendants throughout the diaspora for this “Year of the Return” embodies this spirit of reconnection and marching forward together. There’s a Ghanaian proverb that says: “When you remove one broomstick it breaks, but when you put them together they do not break.”  Meaning, there is strength in unity.

We become stronger as we acknowledge and tell our shared story. For many African-Americans, that story involves finding their roots, through family lore and ancestral records where they exist, and more recently through DNA testing.

In fact, two Members of Congress who visited last week had a special homecoming during their four-day visit. Through DNA testing, Representative Bobby Rush of Illinois traces his ancestral origins to the Ashanti, and Representative Barbara Lee of California, to the Fante.  Such discoveries have led to many reunions of extended family members, separated even for centuries, and it is powerful to hear these reunification stories.

Just this week I read the story of Congolese-born American Jean Kapenda, who through DNA testing found his fourth-cousin, Aiyana Lakes.  Kapenda stated “It’s as if I was lost and somebody found me,” while Ms. Lakes said of being found and connected to her African family, “Our history doesn’t begin and end with slavery…Our first conversations had nothing to do with slavery.  It had everything to do with, ‘Your tribe is full of strength in riches…’  I wish that we as African Americans and scholars would teach more of the power that comes out of Africa versus just the slave trade, ” she added.

This sentiment of capturing Africa’s strength and richness is the aim of HACSA, highlighting and promoting the importance of heritage and culture for socioeconomic development. HACSA’s Summit and this exhibition represent an opportunity not only to preserve our shared culture, but also to encourage and support civil society, including women and youth, to better advocate for conservation of heritage and culture.  This history belongs to all Ghanaians, all Africans, and all the diaspora communities worldwide.

I’ll close with some of the same words I offered two weeks ago to commemorate Emancipation Day in Ghana, “May this opportunity to reconnect during the Year of Return help get the real story out of today’s Ghana and overcome misrepresentations and stereotypes. And may our longstanding ties grow from strength to strength.”

Again, my heartfelt appreciation and gratitude to Ambassador Svanikier and HACSA for organizing an event that captures this sentiment and does indeed deepen the relationship not only between the United States and Ghana, but also between Africa and the diaspora.