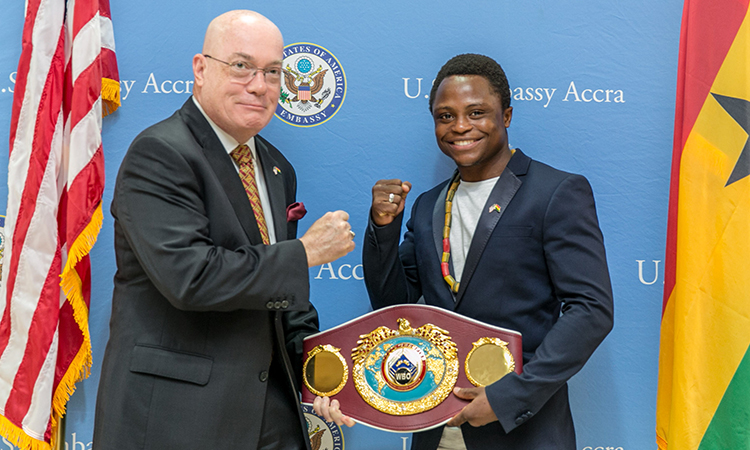 On February 16, Ambassador Robert P. Jackson welcomed World Boxing Organization (WBO) Interim Super Bantamweight champion Isaac Dogboe to the U.S. Embassy in Accra.  The champ was accompanied by his father Paul Dogboe, Dr. Donald Cog Senanu Agumenu, Ellis Quashigah, Nana Ama Eson-Mensah, and  Maurice Quansah.  In their meeting, the Ambassador lauded the Ghanaian boxing champion as “a role model for all youth in Ghana and the United States,” and congratulated him for his efforts as a Global Ambassador for Ghana to champion youth empowerment, peace, education, and raise awareness against crime, drug trafficking, and other vices.  “While not every youth can become a boxing champion, you have inspired them and they can become champions in their field by persevering in attaining an education.”

The Ambassador extended “The Champ” best wishes in his upcoming fight in Las Vegas, Nevada against Jessie Magdaleno for the WBO Junior Featherweight title.  Mr. Dogboe and his delegation noted that they “were honored to be associated with the United States and to work to strengthen the partnership between our nations based on our shared values.”