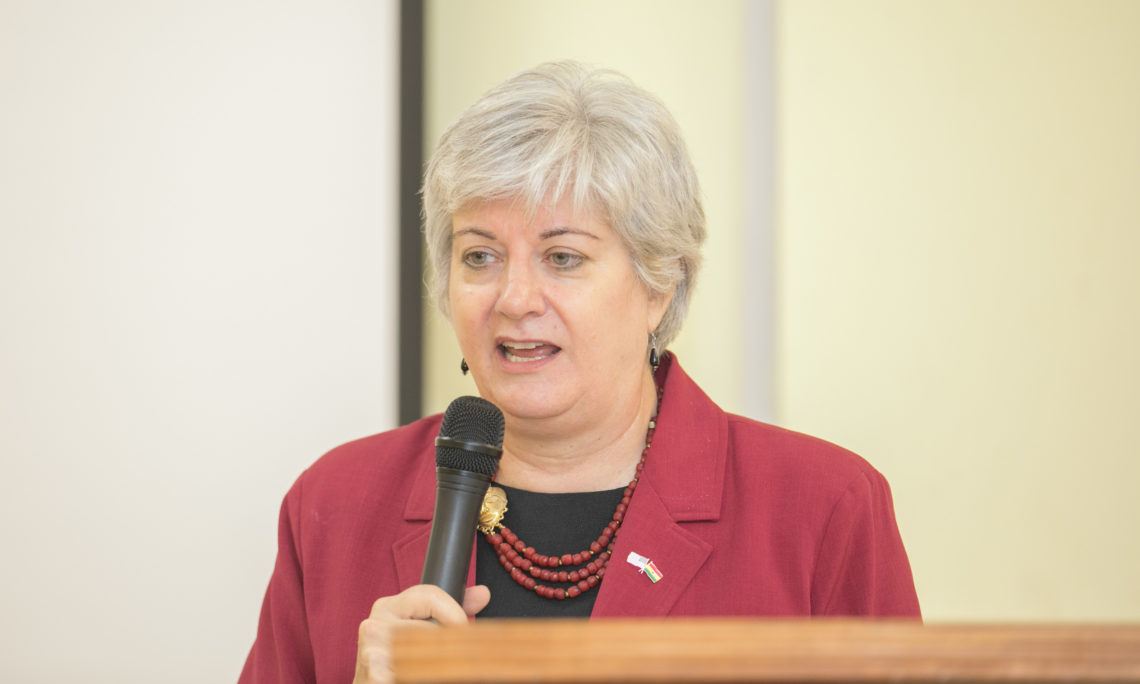 ACCRA, Ghana – The story of U.S. leadership in the global battle against COVID-19 is a story of days, months, and decades. Every day, the United States provides U.S. technical assistance to hospitals and labs around the world. These efforts, in turn, build on a decades-long foundation of American expertise, generosity, and planning that is unmatched in history.

The United States provides aid for altruistic reasons, because we believe it’s the right thing to do. We also do it because pandemics don’t respect national borders. If we can help countries contain outbreaks, we’ll save lives abroad and at home in the United States.

That generosity and pragmatism explain why the United States was one of the first countries to help the Chinese people as soon as reports emerged from Wuhan of another outbreak. In early January, the U.S. government offered immediate technical assistance to the Chinese Center for Disease Control and Prevention.

In the first week of February, the United States transported nearly 18 tons of medical supplies to Wuhan provided by Samaritan’s Purse, The Church of Jesus Christ of Latter Day Saints, and others. We also pledged $100 million in assistance to countries to fight what would become a pandemic – including an offer to China, which was declined.

Our response now far surpasses that initial pledge. Since the outbreak of COVID-19, the U.S. government has committed nearly $500 million in assistance. This funding will improve public health education, protect healthcare facilities, and increase laboratory, disease-surveillance, and rapid-response capacity in more than 60 of the world’s most at risk countries– all in an effort to help contain the outbreak.

Our aid helps people in the most dire circumstances. For instance, the U.S. government is helping United Nations agencies and nongovernmental organizations build more water, sanitation, and health facilities across northern Syria to prevent the spread of the virus. We are also working with NGOs to deliver medicines, medical supplies, and food to the Syrian people, including those living in regime-held areas.  We are aiding friends from Africa to Asia, and beyond.

America’s unsurpassed contributions are also felt through the many international organizations fighting COVID-19 on the front lines.

The United States has been the largest funder of the World Health Organization since its founding in 1948. We gave more than $400 million to the institution in 2019 – nearly double the second-largest contribution and more than the next three contributors combined.

It’s a similar story with the U.N. Refugee Agency, which the United States backed with nearly $1.7 billion in 2019. That’s more than all other member states combined.

Then there is the World Food Program (WFP), to which the United States gave $3.4 billion last year, or 42% of the WFP’s total budget. That’s nearly four times the second-largest contributor, and more than all other member states combined. We also gave over $700 million to the United Nations Children’s Fund (UNICEF), more than any other donor.

We are proud that when these international organizations deliver food, medicines, and other aid all around the world, that too is largely thanks to the generosity of the American people, in partnership with donor nations.

The United States continues to be the single largest health and humanitarian donor for both long-term development and capacity-building efforts with partners, and emergency response efforts in the face of recurrent crises. This money has saved lives, protected people who are most vulnerable to disease, built health institutions, and promoted the stability of communities and nations.

Here in Ghana, the strong partnership between the United States of America and the Ghana Armed Forces (GAF) is at the forefront of combating COVID-19.  The GAF has deployed one state-of-the-art Level II Field Hospital in the Greater Accra area as part of the government of Ghana’s COVID-19 response to directly serve those most in need.  The hospital is one of two that I handed over February 4 this year on behalf of the United States.  The donation was made through the U.S. government’s Africa Peacekeeping Rapid Response Partnership (APRRP) program.  Also in early February, even before Ghana had its first known case, the U.S. National Institutes for Health, through its longstanding partnership with the Noguchi Memorial Institute for Medical Research, made available material to enable several hundred samples to be tested.

However, our help is much more than money and supplies. It’s the experts we have deployed worldwide, and those now conducting tutorials via teleconference. I am pleased that members from my embassy team – from the U.S. Centers for Disease Control and Prevention (CDC), Naval Medical Research Unit Three (NAMRU-3), U.S. Agency for International Development (USAID), and others – are working closely with the government of Ghana on how best to combat this pandemic. It’s the doctors and public-health professionals around the world who have been trained thanks to U.S. funding and educational institutions.

Of course, it isn’t just our government helping the world. American businesses, NGOs, and faith-based organizations have given at least $1.5 billion to fight the pandemic overseas. American companies are innovating new technologies for vaccines, therapeutics, diagnostics, and ventilators.

As we have time and time again, the United States will aid others during their time of greatest need. The COVID-19 pandemic is no different. We will continue to help countries build resilient health care systems that can prevent, detect, and respond to infectious disease outbreaks. Just as the United States has made the world more healthy, peaceful, and prosperous for generations, so will we lead in defeating our shared pandemic enemy.

The United States reaffirms this commitment to our partnership with Ghana. As Secretary of State Mike Pompeo said on April 10, we are also thankful to the government of Ghana for its strong support in helping the U.S. Embassy in Accra repatriate over 1,400 American citizens and permanent residents of the United States who requested assistance to return to the United States at this time.

We are also doing our part as a U.S. Embassy team to be good neighbors and friends. Since March 25, the U.S. Embassy in Accra has been closed to the public, and will remain closed until at least April 20.  We took this step to maximize social distancing and minimize movement to stop the spread of COVID-19. It is also the responsible and right thing to do for each other.

We continue to provide updates to American citizens in Ghana on how to enroll in the Smart Traveler Enrollment Program (STEP.state.gov) via the U.S. Embassy website (gh.usembassy.gov) and social media platforms (@usembassyghana on Facebook, Twitter, and Instagram).  For emergency American Citizen Services, please contact the U.S. Embassy Consular Section by emailing ACSAccra@state.gov.

Now more than ever, the United States is pleased to work together with the government and people of Ghana.  I also echo His Excellency President Nana Addo Dankwa Akufo-Addo’s call for all Ghanaians and residents of Ghana to stay home as much as possible at this time, as one of the most effective ways to combat the pandemic and “flatten the curve.”

A Ghanaian proverb states: “A worthy cause is worth pursuing to the end.”

Together, we will emerge from this stronger and more united.