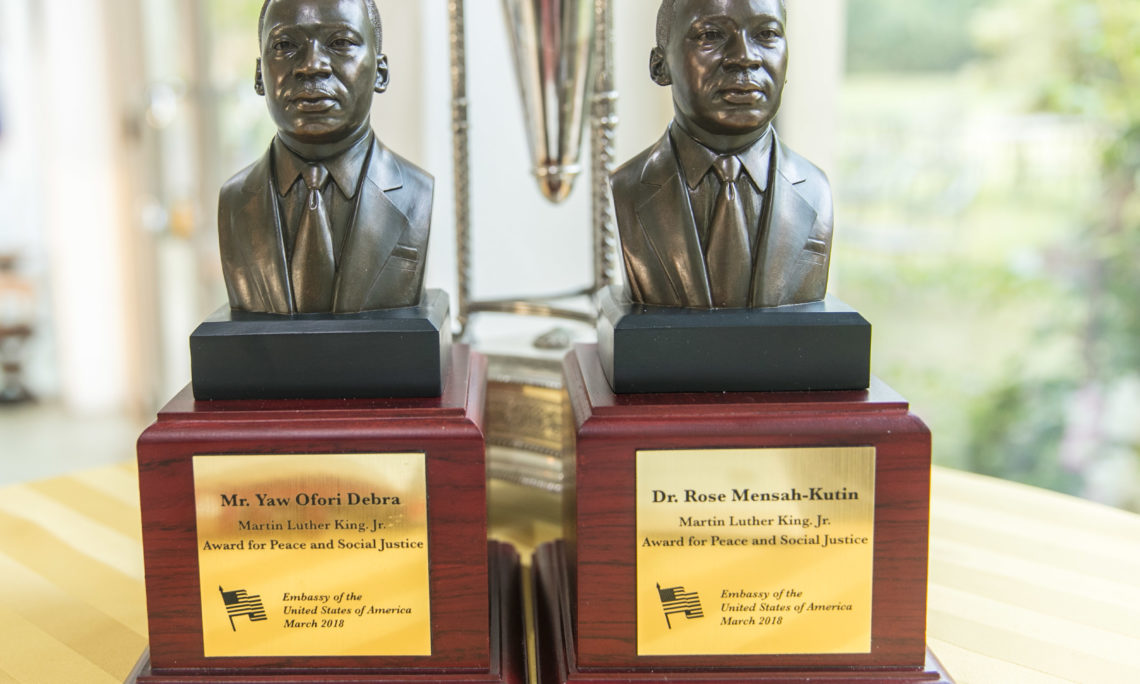 In a ceremony held at his residence on March 22, 2018, U.S. Ambassador to Ghana Robert P. Jackson honored Dr. Rose Mensah-Kutin and Mr. Yaw Ofori Debra with the 2018 Martin Luther King, Jr. Award for Peace and Social Justice. Since 2008, the U.S. Embassy has presented the award annually to one or more Ghanaian citizens who exemplify the spirit of American civil rights leader Dr. Martin Luther King, Jr.  Read the Ambassador’s remarks below.

Our guests of honor, Dr. Rose Mensah-Kutin and Yaw Ofori Debra,
Honorable Ministers of State,
Your Excellencies, Dear Colleagues from the Diplomatic Corps,
Members of the Media,
Distinguished Ladies and Gentlemen,

Good morning!  My wife, Babs, and I are pleased to welcome you to the Eleventh Annual Martin Luther King, Jr. Award Ceremony and Breakfast.  We have gathered today to honor not one, but two, Ghanaian heroes.

Each year since 2008, the U.S. Embassy has recognized one or more Ghanaians who — in the same spirit as Dr. King — have promoted social justice, peace, and human rights.  This tradition was started by former Ambassador Pamela Bridgewater and has, through the years, recognized a number of outstanding individuals, many of whom are here today.

Dr. King took a stand to defend the civil rights of African Americans and dreamed of the day when his children, and every American, would be treated with dignity and judged based on the content of their character.  He successfully exhorted millions — including Presidents Eisenhower, Kennedy, and Johnson — to see the justice of the civil rights movement, defined by peace, but shaped by courage and sacrifice.  He understood that change does not happen overnight, but that citizens have the right to take a stand to promote justice.

It gives me great pleasure to present this year’s Martin Luther King, Jr. Award for Peace and Social Justice to two Ghanaians who have taken a stand:

They are both so accomplished that I could be up here for well over an hour celebrating their achievements.  I think it is more important that you hear from them; so allow me to cover some of the highlights of their extraordinarily consequential service.

Dr. Rose Mensah-Kutin has distinguished herself as a champion for women’s rights in Ghana.  As Director of the West African Regional Office of ABANTU for Development since 2000, Dr. Mensah-Kutin has relentlessly pursued gender equality in public policy.  One of her hallmark achievements was the creation of the 2004 Women’s Manifesto for Ghana. The manifesto articulates a set of demands that, if fulfilled, will address the disparate treatment women still too often face in their daily lives.  Although not all of these demands have been met in the 14 years since the manifesto’s inception, the document continues to serve as a rallying point for the member organizations of the Women’s Manifesto Coalition, a group led by Dr. Mensah-Kutin which is continuing the fight for gender equality in Ghana.

A believer in the importance of ensuring women’s voices are heard at local levels, Dr. Mensah-Kutin was a leading advocate for the passage of the Local Governance Act of 2016, which included many gender-specific provisions.  Thanks to her vision, in recent years ABANTU has trained 5,000 women to participate in local government and helped realize the aims of the Local Governance Act.

In the lead-up to the 2016 elections, Dr. Mensah-Kutin led efforts to ensure women voters were given the tools to make educated choices at the ballot box.  This included developing a scorecard on political party commitments to gender equality, reviewing the status of progress on the Women’s Manifesto for Ghana, and developing a brochure on Women as Voters.

She has tirelessly advocated for the passage of the Affirmative Action Bill, which seeks to increase the participation of women in government.  In his State of the Nation address, President Akufo-Addo expressed his support for the bill, and committed to working with Parliament to ensure its passage this year.  I applaud the President’s initiative to ensure women are fully represented in governance, and urge the Government to continue to prioritize its consideration of the Affirmative Action Bill this year.

Seeking to empower the next generation of women leaders in Ghana, Dr. Mensah-Kutin’s organization has created an intergenerational mentoring and role modeling program.  The program has groups in all ten regions, and has resulted in more than 2,000 young women being trained to serve as mentors in their home communities. She has also worked to raise awareness of the relationship between gender and natural resources, spearheading a national dialogue on gender and cocoa, which helped dispel the myth that cocoa farming is “man’s work.”

As we say in the United States, she is committed — not to advancing her own vision, but rather to “paying forward” lessons learned for other generations to further expand women’s rights at all levels and in all sectors.  She is a hero, for women and for all Ghanaians, and it is my honor to recognize her today.

Mr. Debra is a lifelong leader in the fight for the rights of persons with disabilities.  Refusing to let his own visual impairment hold him back, he has dedicated his life to ensuring that Ghanaians with disabilities have equal opportunities to develop and share their talents, and contribute toward a future of peace and prosperity for Ghana.

As a student leader in the late 1980s, Mr. Debra lobbied the Government of Ghana for payment of reading allowances for visually impaired students in tertiary institutions.  He went on to become a teacher himself, transforming countless lives. In January 2005, Mr. Debra became the President of the Ghana Federation of Disability Organizations, representing a network of eight organizations.  He understood that protections for the rights of persons with disabilities could only become stronger with a common movement and platform. He saw that it was urgent — long past due, in fact — to begin a national dialogue and take action.

He mobilized disability organizations to effectively advocate for the passage of the Ghana Disability Act and for Ghana’s ratification of the UN Convention on the Rights of Persons with Disabilities.  He was influential in instituting the National Disability Day, and coordinating media and parliamentary caucuses to endorse disability advocacy.

And again I come back to Ghana’s 2016 elections.  Mr. Debra and his organization challenged outdated notions that persons with disabilities cannot participate in electoral processes.  He sponsored radio advertisements with songs urging Ghanaians to assist family members to vote if they face accessibility issues, and supported work by the Ghana Blind Union to improve accessibility of polling sites.  The GFDO deployed more than 200 persons with disabilities as election observers. They verified, through their own survey, that more than 78 percent of polling sites “had accessible paths leading up to the polling site.”  He played a critical role in ensuring that all citizens could participate in the democratic process and have their votes counted.

In 2017, Mr. Debra facilitated the formation of a disability workers union to advocate for improved working conditions in the private and public sector.  And following the installation of the new government he successfully pushed for fulfillment of the pledge to recruit more persons with disabilities to manage automated toll booths.

Mr. Debra has been a tireless voice for including persons with disabilities in Ghana’s development planning at all levels