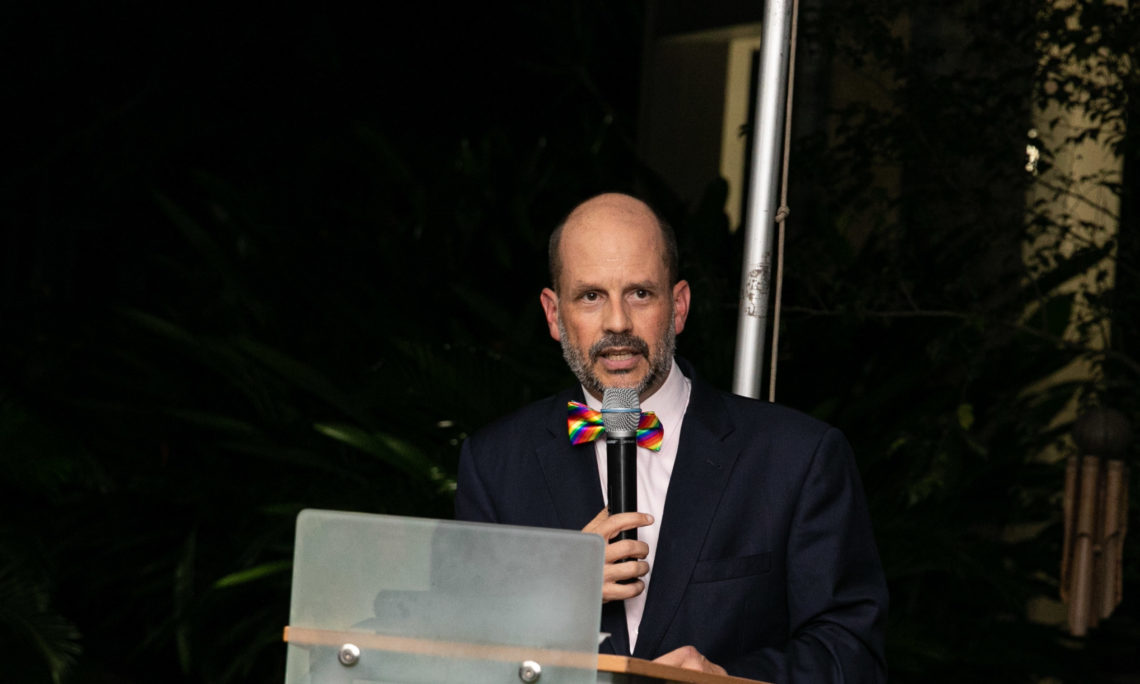 Good evening everyone, and welcome once again to the U.S. Embassy’s annual LGBT Pride reception for 2019.  I’m really pleased to see so many friendly and familiar faces here tonight, along with a few new ones as well.

As you just heard, my name is Christopher Lamora, and I’m the Deputy Chief of Mission at the U.S. Embassy here in Ghana.  I’m also a proud member of the worldwide LGBT community, and for both those reasons, I’m extremely happy to be your host tonight. I’m honored by the presence of our U.S. Ambassador, Stephanie Sullivan, as well as our colleagues from the U.S. embassy and the wider diplomatic corps. Most of all, though, I’m honored by the presence of so many members of Ghana’s LGBT community.  Because really, at its core, tonight is about celebrating you…  Your uniqueness, your awesomeness, and your pride!

Depending on where you live, getting here may have taken you quite a long time.  Maybe you had to rearrange your work schedules, or get a ride with a friend.  And you may or may not have told other people where you were going. Every one of your situations is different, of course, but there’s at least one thing all of my Ghanaian LGBT brothers and sisters who are here tonight have in common. Each and every one of you is demonstrating — right at this moment, just by being here — courage and self-respect.  And I admire and applaud you for it.

Being LGBT isn’t always easy.  I know. From those early realizations that we’re somehow different from the other kids at school, even if we can’t quite put our finger on why or how. To the growing understanding of exactly what that difference is, and along with that, the nervousness and fear for what it will mean in our daily lives. Will our families and friends accept us for who we are, and support and love us, no matter what? Will we be in danger from those who find a need to intimidate and hurt LGBT people? Will we be able to get a good job, and have a fulfilling career?  And if we do get one, will we be at risk of losing it?

And on a more personal level… If I move to a new country and suddenly find myself overseeing an embassy with 700 people I’ve never met, when and how do I tell them I have a husband back home? It wasn’t all that long ago, in the span of history, when I couldn’t even have asked myself that question. When I joined the Department of State (our foreign ministry) in 1991, LGBT people who “came out” risked losing their security clearances, which often meant losing their jobs.

So people had to make tough choices…

Either to be open about who we were and face the possible career consequences, or to lie low and hope that things would change. Fortunately, for me, things quickly began to change shortly after I started working.  In 1992, the first LGBT advocacy organization for State Department employees was formed, and during the course of the 1990s, numerous decisions and directives from the President and Secretary of State ensured that LGBT employees in the U.S. Government gained new protections against discrimination. It took a long time for us to get to that point, though.  Change often does.

I started taking Twi classes in early May, and was recently telling a Ghanaian friend about the challenges I was facing with the language.  In response, she shared with me a Twi proverb that I think is just as applicable to the pursuit of LGBT rights as it is for my language-learning: Kakrankakra, n’akokɔ benom nsuo.  —  Little by little, the hen will drink water.  In other words, “All in good time.” But “All in good time” doesn’t mean that it’s enough to sit back and wait for good things to happen.  Just as I have to study my vocabulary and pronunciation to improve my Twi, all of you have to continue to engage – to the extent you feel comfortable and safe doing so – to advocate for the changes you want to see.

And I know that many of you are already doing that, because I’ve learned through our conversations about the good and brave work you’re undertaking. The first time I spoke with any of you about your work was right here, in this garden, on June 28 of last year, when my predecessor hosted the 2018 version of tonight’s event.  I had arrived in Accra that same morning, on the overnight flight from New York.  I was jet-lagged and exhausted, and I barely knew where I was.

But there was no way I was going to miss the Pride event that coincided with my first day in Ghana.  And I wasn’t disappointed.  In fact, you energized me about the next three years that I’d be spending here in Accra. Seeing so many of you there that night – many of the same faces who are here now – I was moved and impressed by the courage you demonstrated just by showing up.

In the year since, I’ve learned that in fact you’re doing a lot more than just showing up:

You’re advocating for health care (in many cases life-saving treatment) to be available to everyone — without bias, stigma, or discrimination.  I saw this first-hand when I went out to Ho in December for the World AIDS Day durbar. You’re building important alliances with people and organizations working on other human rights issues, and, through these coalitions, multiplying your effectiveness.

You’re engaging with lawmakers, law enforcement authorities, and your fellow citizens to explain that what you’re asking for are the same things every Ghanaian citizen expects and has a right to expect:  safety, security, opportunity, dignity, and respect.

And at the same time you’re working so tirelessly to improve your own lives, you’re also laying the groundwork for a brighter future for the next generation of LGBT Ghanaians coming up behind you.  They will be grateful to you for it. Each of us benefits from the work done by those who preceded us.  Or, as Ambassador Sullivan is fond of saying, “We stand on the shoulders of our ancestors.”

Fifty years ago this month, two things happened that affected the course of my life. The first was that I was born. The second, and much more important in the grand scheme of things, was that, at a gay bar in New York City called the Stonewall Inn, patrons who had grown tired of being harassed and abused by the police stood their ground and stood up for their rights. The “Stonewall Rebellion,” as it came to be known, is considered by many to have launched the modern gay rights movement in the United States and, by extension, around the world.  It’s the reason we celebrate Pride Month in June – in memory of, and appreciation for, the stand they took back in June 1969.

Many of the names of the people who were at the Stonewall Inn and took that stand have been lost to history.  But that doesn’t negate their importance, just as many of you are working largely behind the scenes, often anonymously, to create positive change here in Ghana.  And we at the U.S. Embassy will continue to support you in those efforts.

As President Trump said at the beginning of this month:  “As we celebrate LGBT Pride Month and recognize the outstanding contribution LGBT people have made to our great Nation, let us also stand in solidarity with the many LGBT people who live in dozens of countries worldwide that punish, imprison, or even execute individuals on the basis of their sexual orientation.”

Fortunately, the most extreme of these abuses are not happening here in Ghana, and we at the Embassy have been pleased to learn that you’ve increasingly been able to engage productively with the police and other authorities about protecting your basic rights to be free of harassment and intimidation.

There’s still a long road ahead, no doubt, and at times it will be difficult.  But I urge you not to lose hope, because I know that you are up to the challenge. And I think we should all take heart from recent events in other countries, including the decision of the Supreme Court of Botswana a week ago today to strike down the country’s law criminalizing same-sex sexual relations, making it the first country in Africa to do so.

I don’t know how to say, “Congratulations!” in any of the local languages of Botswana, so a long-distance “Ayekoo!” to our friends down there will have to do. I’m going to stop here, because I really want to turn the microphone over to some of the members the local LGBT community to hear your own perspectives about how things are going.  I know that we will all benefit from your insights, including how we in the international community can most effectively stand with you and support you.

So since this is a Pride celebration, let me just close by saying that I’m extremely proud to be a part of the Embassy Accra team, as well as a member of the diverse and dynamic worldwide LGBT family, and to call so many of you here tonight my friends.

Thank you very much.