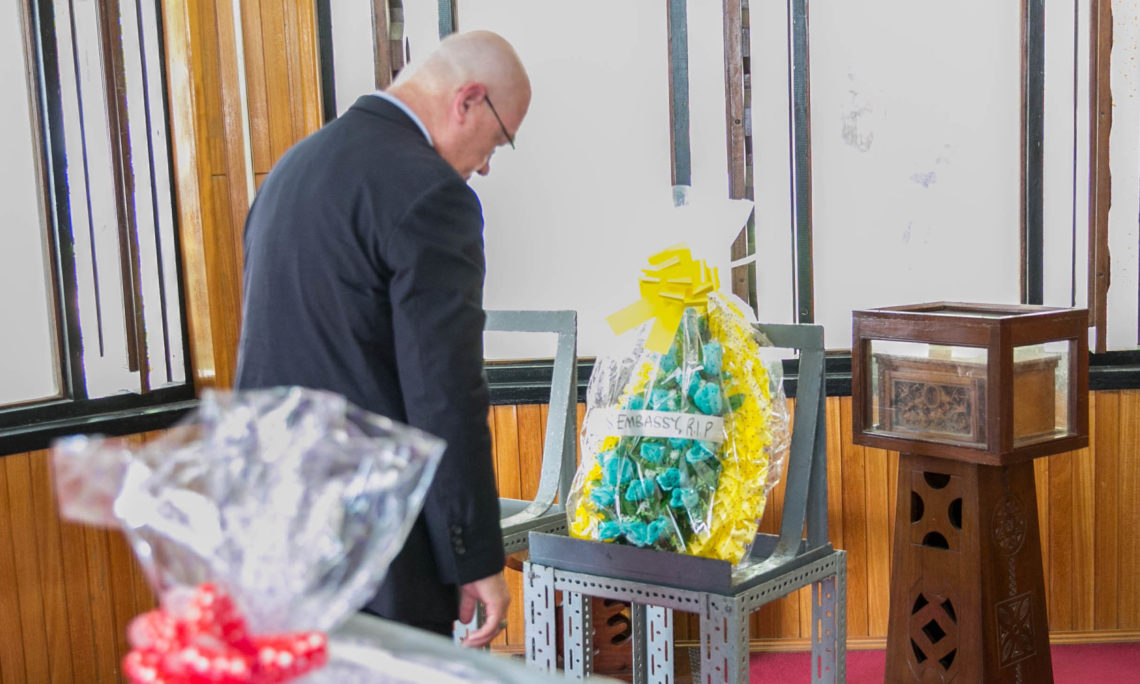 “I sensed that Africa had come … from the sum of Heaven’s glory.”

Ambassador Jackson drew on the poetic words of W.E.B. Du Bois himself when speaking at the durbar and wreath laying celebrating the 150th anniversary of Du Bois’ birth on Monday, February 19, 2018. A venerated scholar, activist and Pan-Africanist, Du Bois moved to Ghana in 1961 and is buried in the Cantonments neighborhood of Accra. It was our privilege to partner with the African-American Association of Ghana to honor Dr. Du Bois’ legacy and to welcome his great-grandson, Mr. Arthur McFarlane II, to Ghana.

The poem “Ghana Calls” is dedicated to Kwame Nkrumah. You can read the full text here: http://ow.ly/gzh830itgus. Read his full remarks below.

Good morning.  There’s an old saying, “we stand on the shoulders of giants.”  The phrase describes how we have achieved progress by building on the work of those who came before us.  We still have much progress to make in America, in race relations, and beyond.  But much of the progress we have made ties back to thought leaders like Dr. W.E.B. Du Bois.

To say that Du Bois’ thinking was ahead of its time is a vast understatement.  He was one of the greatest scholars in American history during his 70-year career.  That’s seven zero.

Today, however, I want to shift away from discussing his thinking.  Instead, I’d like to focus on his beliefs.  His beliefs about Africa.  Du Bois loved Africa.  He loved Ghana.  And he loved Accra so much so that he traveled here at the age of 93 and so much so that this country became his final resting place.

He wrote a poem after arriving at this peaceful, leafy green place where we stand today a poem entitled “Ghana Calls,” which he dedicated to Kwame Nkrumah.  I’ll skip to the latter part of his poem, which reads:

I came to Accra.
Here at last, I looked back on my Dream;
I heard the Voice that loosed
The Long-looked dungeons of my soul
I sensed that Africa had come
Not up from Hell, but from the sum of Heaven’s glory.

Dr. Du Bois passed away on the eve of the historic 1963 March on Washington, the same march at which Dr. Martin Luther King, Jr. delivered his famous “I Have a Dream” speech.  A crowd of more than 200,000 demonstrators had gathered in Washington on that clear, sunny day.  They heard over a loudspeaker about the passing of Dr. Du Bois half a world away, in a land that he loved.  It was a reminder that in their fight for equality and justice they, too, were standing on the shoulders of giants — Giants like W.E.B. Du Bois.