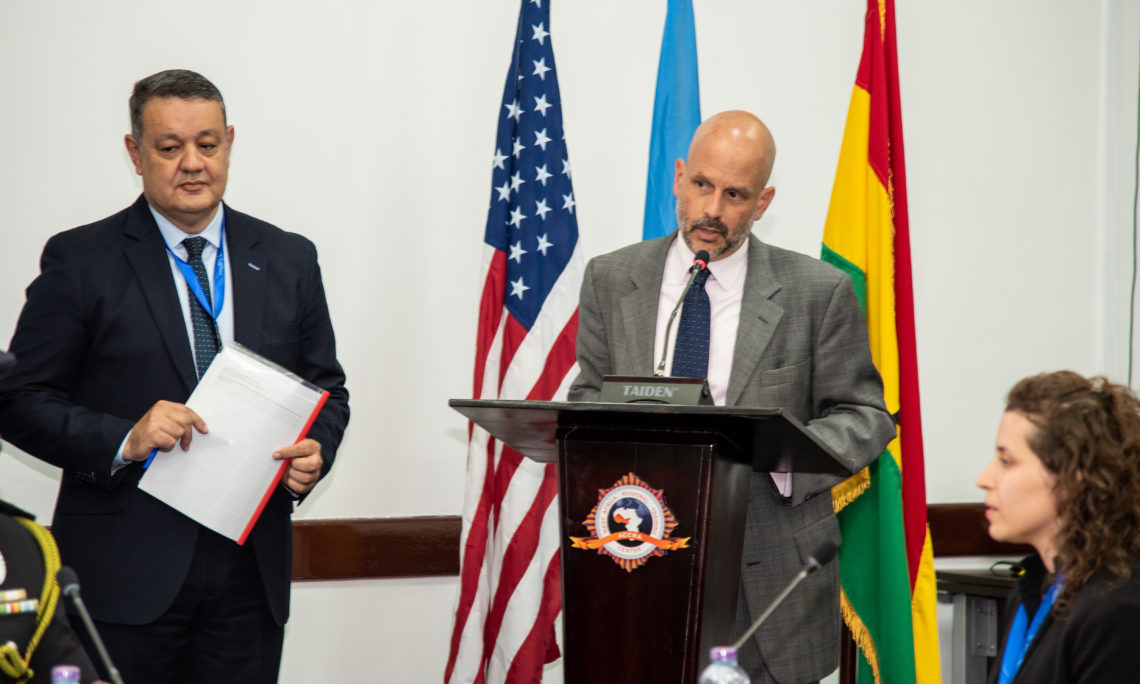 On behalf of the U.S. Ambassador to Ghana, Stephanie Sullivan; the U.S. Department of State; and the Bureau of International Narcotics and Law Enforcement Affairs (INL), I’m pleased to welcome you to the West Africa Regional Training Center for a workshop on Performance Assessment and Evaluation for the UN Formed Police Unit (FPU).

I’d also like to thank the Government of Ghana and the UN Police Division Police Advisor Luis Carrilho and his staff in the Selection and Recruitment Section for helping make this occasion possible. I’m honored to be here today to mark the next step in peacekeeping reform process.

The United States has long been a strong supporter of UN Police. We recognize the complex tasks required of UN police peacekeepers and the challenging environments in which they operate. Police in UN missions play a critical role in helping combat criminal and terrorist organizations that act as spoilers in post-conflict situations.  Police – as opposed to military – peacekeepers, offer an important component of the transition from a military presence to stabilization and civilian leadership.

I have direct experience with the great value FPUs bring to these environments. Immediately prior to coming to Ghana in June 2018, I had spent two years overseeing our Central Africa policy, which included trouble spots such as the Democratic Republic of the Congo and the Central African Republic.  Both countries of course host large UN peacekeeping missions in which Formed Police Units are a critical component.  Moreover, I was engaged with the UN Department of Peacekeeping Operations and the Government of Rwanda during their discussions to deploy a primarily female Rwandan FPU to UNMISS in South Sudan.  So I appreciate tremendously the work FPUs do in civilian protection and security service transition in some of the world’s most difficult places.

The United States and our current host nation, Ghana, have a particularly strong partnership in police peacekeeping. During the past three years, IPPOS has trained more than 1,000 Ghanaian police, trainers, and mechanics to serve in important UN peacekeeping missions.

Worldwide, since 2010, the IPPOS program has helped train nearly 12,000 police from a dozen countries, and has worked with the UN to develop new training courses and strengthen performance standards.

And our combined efforts are working. Police trained in conjunction with the United States regularly pass UN pre-deployment assessments, and have received Medals of Service Excellence in recognition of their leadership and effort to protect civilians, qualities we must demand from all deploying uniformed personnel.

And while we acknowledge the critical importance of peacekeeping, it’s important also to acknowledge the challenges faced by today’s peacekeepers. Recent years have seen a dramatic increase in fatal attacks on peacekeepers.  We pay tribute to the sacrifice and bravery of those who have given their lives for the sake of peace, and recognize those on the ground who are bravely executing the mandates of the Security Council.

It’s well known that the safety and security of peacekeepers are directly linked to their performance, as noted by the Cruz Report in 2017. That report, formally named “Improving the Security of United Nations Peacekeepers,” showed that adequate training, equipment, and performance significantly mitigate risk to peacekeepers and increase security and safety of the vulnerable populations under their protection.

We also welcome the Secretary-General’s “Action for Peacekeeping” Initiative, which seeks to ensure that performance data form the basis for mission planning.

I’m excited to open this workshop as part of our support to the UN Police Division in working to strengthen how it collects, manages, and analyzes data on police peacekeeping operational requirements and unit field performance. Increasing the availability of objective information to support performance-based decision-making will make missions more effective on the ground and bolster the ability of the UN to respond to new crises with high-performing police peacekeepers.

As Police Commissioners and FPU Coordinators, you have the responsibility to ensure that the FPUs deployed to protect civilians, maintain public order, and protect UN operations are operating at the highest capacity to safely and effectively carry out their mandates. This new Standard Operating Procedures manual will lay the groundwork for FPUs to meet standards, recognize units that exceed standards, and identify areas of improvement for FPUs that are not fully operational.

I look forward to the continued partnership amongst Ghana, the United States, and the United Nations to continue to build the capacity of the FPU and strengthen the ability of the UN to collect, analyze, and evaluate performance data. Doing so will greatly improve the ability of FPUs to achieve peacekeeping mission mandates, and provide effective security to civilians and UN personnel in harm’s way.