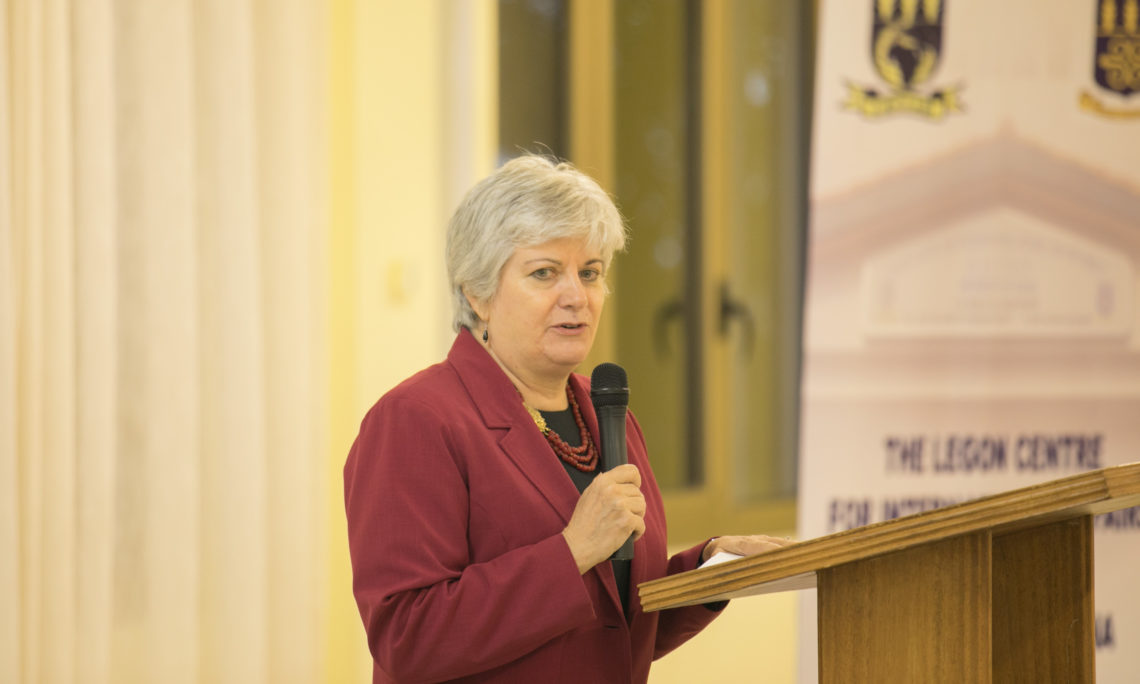 at the University of Ghana / LECIAD Guest Seminar Series Program

“One Day that Changed the Face of the World:

The Scars of 9/11 on International Relations and Diplomacy”

Good afternoon.  Thank you for inviting me today to discuss with you the terrorist attacks of September 11, 2001 — now commonly referred to as “9/11” — and, specifically, how that day’s events changed the world’s diplomatic landscape.

I say “the world’s” landscape because, as President George W. Bush observed on that tragic day, 9/11 wasn’t just an attack on the United States but on the world itself.

Nearly 3,000 people from more than 80 countries, including at least two Ghanaians, died that day in New York, at the Pentagon, and in a field in Pennsylvania.  Over the past 19 years, countless others have died as a result of 9/11-related illnesses such as cancer and respiratory ailments.

But what the hijackers and their financial and political backers took from us that day went far beyond those thousands of lives that were cut needlessly short.  They also disrupted the illusion that the United States, buffered as we are by friendly nations to the north and south, and oceans to the east and west, was somehow protected and immune from the mass terrorist violence other countries had long experienced.

Yes, we had suffered a deadly attack on the U.S. Marine barracks in Lebanon in 1983, an earlier attempt on the World Trade Center in New York in 1993, and the simultaneous bombings of our embassies in Nairobi and Dar es Salaam in 1998.  But never before had something as large and as deadly as 9/11 happened on U.S. soil.

As President Obama later said on the tenth anniversary of 9/11, “… evil was closer at hand, and uncertainty clouded our future.”

What was clear, though, was that in their effort to single out the United States, the 9/11 perpetrators actually drew the United States closer to the rest of the world.  And the world responded with an outpouring of sympathy, empathy, and goodwill.  I particularly remember the headline in the French newspaper Le Monde:  “Nous sommes tous américains!”… We are all Americans.

But it’s important, I think, to understand such expressions of solidarity not in terms of shared victimhood, but rather, in our resolve to ensure it never happened again.  Thus, when President Bush called upon the nations of the world to join the United States in what he named the “War on Terror,” again, the world responded.

Traditional allies and new ones alike joined with us, first in Afghanistan and later in Iraq, as members of coalitions unprecedented in their scope and diversity.

Because terrorism knows no borders, and terrorists can strike anywhere, at any time.  Their victims can be of any nationality, race, color, or creed.  And so to combat a shared threat, we undertook a shared effort.

Yet despite this nearly universal objective, some people questioned the United States’ motivations.  The most pernicious accusation was that our “War on Terror” was in truth a “War on Islam” because the 9/11 hijackers happened to be Muslims and the two countries in which we were engaged militarily were majority Muslim.

Nothing could be further from the truth.

For the past 19 years, the United States has remained steadfast in our dedication and support to people around the world, of all religious traditions, who seek nothing more or less than we do – to live their lives free from the threat of terrorism.

Just days after 9/11, President Bush visited the Islamic Center of Washington, DC, where he stated that “Islam is a religion of peace,” and underscored that the terrorists of 9/11 did not represent the faith and ideals of Islam.

President Trump reiterated this at the iftar he hosted at the White House this past May when he said, in part:

“… [W]e resolve to defeat the evils of terrorism and religious persecution so that all people can worship without fear, pray without danger, and live by the faith that flows from their heart.”

It may seem unusual that I’ve spent this much time explaining how the War on Terror is not a War on Islam.  However, in light of the topic I was asked to speak about today – “The Scars of 9/11 on International Relations and Diplomacy” – I wanted to stress the importance of perceptions.  Every day, around the world, not just American diplomats like me, but diplomats of every country strive to overcome perceptions and misperceptions about their home countries’ priorities, objectives, and even our most fundamental national principles.

This has been particularly true in the case of the United States in the almost two decades since 9/11, because although we still stand for those same fundamental principles, there is no question that September 11, 2001, was – as many others have said before me – “the day the world changed.”  And some of how we do things, and how we interact with other nations, has changed with it.

For instance, our Global Engagement Center (or GEC), which was created in 2016, leads the U.S. government effort to counter propaganda and disinformation from international terrorist organizations and other malign foreign actors.  The GEC plays a key role in our strategy to defeat terrorist organizations and disrupt their ability to recruit new followers.  By working to discredit terrorist ideology among populations susceptible to recruitment, we are preventing terrorist groups from expanding their ranks and thereby countering their ability to carry out attacks.

Internationally, the world has come to recognize that terrorism is in many regards a manifestation of underlying political and socioeconomic issues.  Thus, U.S. foreign policy around the world has been increasingly focused on fostering economic and employment opportunities, good governance, and the respect for human rights… three issue areas that can potentially either drive people into terrorists’ waiting arms or, conversely, solidify their commitment their countries’ long-term peace and stability.

Thus, if you look at the trajectory since 9/11 of what we call our “3D’s” of U.S. foreign policy – defense, diplomacy, and development – you will find increased alignment of these separate tools to achieve this peace-and-stability goal.

In a similar vein on the international level, countries that were perhaps once neighbors but not partners find themselves working together in alliances and coalitions at the regional level to combat common threats.

What’s occurring right now, just to Ghana’s north in the Sahel, is but the most local example.  Working together, countries and citizens stretching from Mauritania on the Atlantic coast to landlocked Chad in the middle of the continent are finding common cause in fighting and defeating terrorist organizations.  That joint effort, with the assistance of the United Nations and others in the international community including the United States, is critical to our long-term success.

But common objectives can only be achieved when there is mutual understanding, which is why LECIAD and other academic institutions and think-tanks play such an important role.  Because by giving the sort of thought and attention to difficult issues like we’re discussing today, you’re not only examining the challenges of today but also building the relationships that will be necessary to successfully address whatever unknown challenges the future may hold.

Talking about 9/11 gives us a great opportunity to reflect on that tragic day… No question.  And we should do that, in honor of the thousands who lost their lives.  But we should also use the commemoration of 9/11 to contemplate how we can cooperate across borders to ensure it never happens again.

The U.S. national motto, the Latin phrase E pluribus unum [“From Many, One”] is appropriate here.  We come from many countries, and we have many different personal and national stories.  But when we come together as one, in common cause and for the common good, there’s no telling what we can succeed in accomplishing.

Thank you very much, and I look forward to taking your questions.