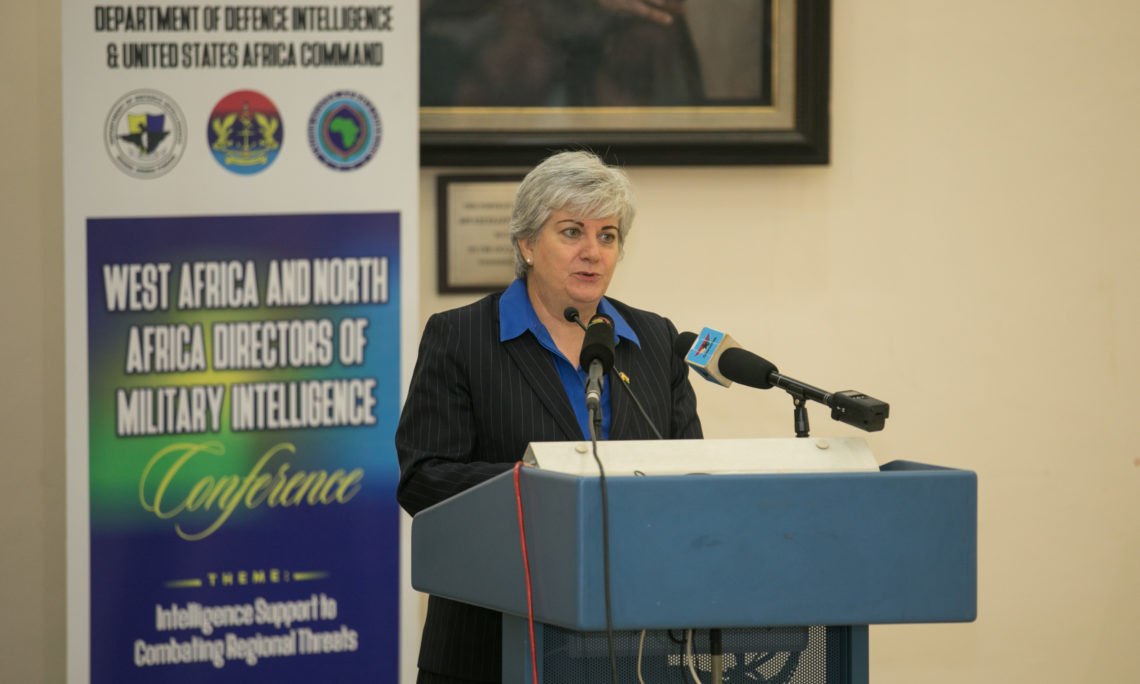 Ambassador Sullivan speaking at the opening ceremony of the Directors of Military Intelligence Conference 2019.

at North and West Africa Directors of Military Intelligence Conference 2019

Minister of Defense of the Republic of Ghana, the Honorable Dominic Nitiwul;

Thank you for this opportunity to speak with you today.  The United States is proud to partner with Ghana and other nations to promote regional security, and to enhance our military intelligence capabilities to protect our citizens.

According the Ghanaian adinkra symbol Adwo (peace): “When the king has good counselors, then he will have a peaceful reign.”   As military intelligence professionals, you are those counsellors!

You play a key role, and I commend you all for what you do. Leaders and decision makers rely on accessing reliable intelligence to maintain the peace and preempt national security threats.

George Washington, victorious general of the American Revolution and the first President of the United States, said about the need for intelligence on the battlefield: “Do not spare any reasonable expense to come at early and true information;  always recollecting, and bearing in mind, that vague and uncertain accounts of things are more disturbing and dangerous than receiving none at all.”

While the conduct of warfare and military operations has changed significantly since General Washington led American patriot forces on the battlefield, the fundamental nature of warfare has remained the same, as has the need for credible, reliable, and accurate intelligence, as has the danger of faulty intelligence as well.

While modern technology and other advancements have allowed military professionals to cast a wider net in an effort to obtain “early and true information,” there has also been an unfortunate parallel growth in the number of “vague and uncertain accounts” that must be filtered.

Having served as director of the State Department’s 24/7 Operations Center from 2008 to 2010, I know how difficult it can be to discern fact from fiction, working on a tight deadline so policy makers can make informed decisions rapidly, especially in a developing security crisis.

I fully understand your difficult challenge. I thank AFRICOM and the Ghana Armed Forces for convening this conference to discuss our shared interests of regional peace and security. Many countries represented here have suffered attacks from a growing network of international violent extremist organizations that plague the West African and North African sub-regions.

Many of your militaries are engaged daily in a fight against extremism and terrorism.  But as you know, the threats we all face in North and West Africa are not specific to any one country.  These threats affect all of us.  Terrorist groups and the individuals they radicalize are constantly learning and adapting, seeking new ways to exploit our weaknesses.  And borders have no meaning to these malign actors. That’s why protecting our own individual countries requires protecting the entire region.

It requires dedicated teamwork and partnership with one another.  Regional coordination, such as that which will be occurring over the next two days, and that which occurs daily within the G5 Sahel, the Multi-National Joint Task Force, and through the Accra Initiative, is perhaps one of the best ways that you can separate “vague and uncertain accounts” from “early and true information.”

Conferences such as this one are excellent venues for making personal connections and sharing lessons learned. The coordination must continue well past the closing of this conference at all levels of your commands.  We must put into practice effective mechanisms that enable regional coordination and information sharing.

But the coordination cannot be just regional, it must also be internal. As military leaders, you must coordinate daily with your interagency and inter-ministerial partners within your countries to develop a whole of government response not only to the threats this region faces, but also to the driving factors underlying those threats.

We must also remember that when military responses are applied, our armed forces must respect the human rights of the citizens they protect and defend in order to merit their public trust and confidence.

During his remarks before the International Summit on Democracy, Terrorism, and Security in 2005, the late Secretary General of the United Nations and son of Ghana, Kofi Annan, namesake of the institution where we are gathered today, observed: “As I see it, terrorism is in itself a direct attack on human rights and the rule of law. If we sacrifice them in our response, we will be handing victory to the terrorists.”

Each of your delegations has traveled here because you recognize that regional threats are evolving every day and that we cannot sit idly by as citizens and communities suffer terror attacks.  Our governments and armed forces have vital experiences and information to share with one another, and the United States welcomes the opportunity to do so as well.

Once again, I would like to thank the United States Africa Command for organizing this event, as well as the Government of Ghana and the Ghana Armed Forces for their role in making the Republic of Ghana a regional leader in peace and security, and the Kofi Annan International Peace Training Center for providing a world-class venue to host this and other regional security partnership programs.

Medaase! Merci! Shukran! Thank you! I wish you a productive conference.