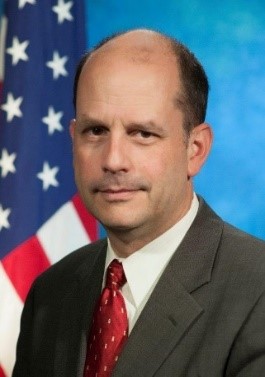 Christopher Lamora most recently served as the Acting Deputy Assistant Secretary of State for Central Africa and African Security Affairs from September 2017 to May 2018. In this capacity, he was also the senior U.S. representative to the International Contact Group for the Great Lakes region of Africa. He was previously the Director of the Office of Central African Affairs and, before that, Deputy Director of the Office of African Economic and Regional Affairs.

Mr. Lamora has worked in and on Africa throughout his 27-year Foreign Service career, including early assignments in Cameroon and the Central African Republic and as desk officer for the Democratic Republic of the Congo. As a Foreign Policy (Pearson) Fellow in the U.S. Senate from 2007-08, Chris led the work of Senator Richard Durbin of Illinois on conflict minerals, the Trafficking Victims Prevention Reauthorization Act, and the Child Soldiers Prevention Act.

He is a 1991 graduate of the Georgetown University School of Foreign Service, where he majored in international relations with a particular focus on the Soviet Union. He joined the Department of State soon after graduation. Within the Foreign Service, his functional specialization (cone) is in consular affairs. In addition to his Africa work, he has also served in Greece, the Dominican Republic, and Guatemala; as Director of the Los Angeles Passport Agency; and in three positions in the Bureau of Consular Affairs in Washington.