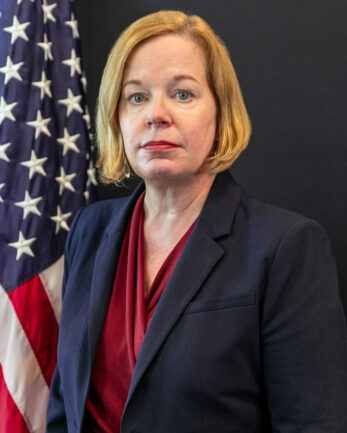 Nicole Ann Chulick, a career member of the Senior Foreign Service, began as Deputy Chief of Mission in Accra in July 2021.  Most recently, she was Acting Assistant Secretary for the Bureau of Global Public Affairs (GPA) after having been Principal Deputy Assistant Secretary since May 2019.  Prior to that, she served in the Bureau of International Information Programs (IIP), first as Deputy Coordinator for Products and then as Principal Deputy Coordinator.  In the latter position, she planned and oversaw the merger of IIP with the Bureau of Public Affairs to create GPA.

Ms. Chulick has also served as Acting Office Director for Press and Public Diplomacy in the Bureau for South and Central Asian Affairs, where she was responsible for providing policy guidance and management oversight for the more than 400 U.S. government employees conducting U.S. public diplomacy in 13 countries, and as Chief of Staff for the Director General of Human Resources.

Additionally, Ms. Chulick was the Counselor for Public Affairs in Sri Lanka and Press Officer in Nepal.  A recipient of several individual Superior Honor Awards from the State Department, she has also served in Nicaragua and Hong Kong.

Before joining the Foreign Service, Ms. Chulick was the national spokesperson for the U.S. Border Patrol.  She has studied Spanish, Cantonese, and Nepali and holds a Master’s degree from Georgetown University.