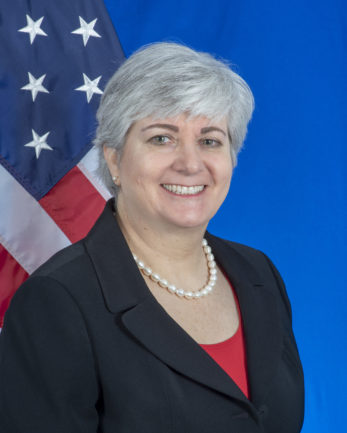 Ambassador Sullivan was Chief of Staff to the Deputy Secretary of State for Management and Resources from 2011-2013.  She was previously Managing Director of the Office of Management Policy, Rightsizing, and Innovation.  She served multiple tours in the Executive Secretariat Operations Center, the State Department’s 24/7 briefing and crisis management center, as Director (2008-2010); Deputy Director (2003-2005); Senior Watch Officer (2002-2003); and Watch Officer (1988-89); and in the White House Situation Room (1989-90).

Ms. Sullivan served as the Political Chief in Accra, Ghana (1997-2001) and as a management, consular, and political officer in Douala and Yaoundé, Cameroon (1986-1988). Other Washington assignments include desk officer for Mali, Niger and Burkina Faso in the Bureau of African Affairs (1991-93) as well as post management and human resources positions supporting colleagues in Africa, Europe, and the Western Hemisphere.

Ms. Sullivan was a Peace Corps volunteer in the Democratic Republic of Congo (1980-1983) and later worked as Chief of Operations for the Africa Region at Peace Corps (1994-96).

Ambassador Sullivan graduated from Brown University with a Bachelor of Arts degree in Classics and from the National War College with a Master of Science in National Security Strategy. She speaks French, Lingala, and some Spanish.