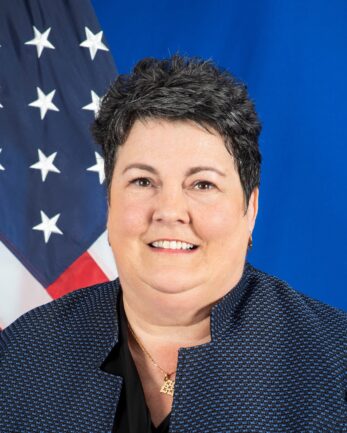 Virginia E. Palmer arrived in Accra to assume her responsibilities as U.S. Ambassador to the Republic of Ghana in April 2022.  She was previously Acting Assistant Secretary for Energy Resources at the Department of State, overseeing U.S. foreign policy engagement at the critical intersection of our energy, climate and national security goals.  She took up that post after serving as Deputy Commandant of the National Defense University’s Eisenhower School.

From 2005-2008, Ambassador Palmer was the State Department’s Deputy Coordinator for Counterterrorism, responsible for terrorist finance issues and regional initiatives to strengthen partner nations’ capacity to degrade terrorist capability.  From 2004-2005, she was Director of the East Asia Bureau’s Office of Economic Policy and the alternate U.S. Senior Official for the Asia Pacific Economic Cooperation forum (APEC).

Other postings during her 36-year diplomatic career include assignments in Kenya, Canada, Zimbabwe, China, and Hong Kong working on political-military affairs, corruption, trade and agriculture, labor and human rights issues, health and development.

Ambassador Palmer obtained her Masters and did doctoral studies at the University of Virginia.  She received a BSFS from Georgetown University and also attended Washington University in St. Louis.  She speaks Mandarin.  She and her husband, retired Foreign Service Officer Ismail Asmal, have two adult daughters.