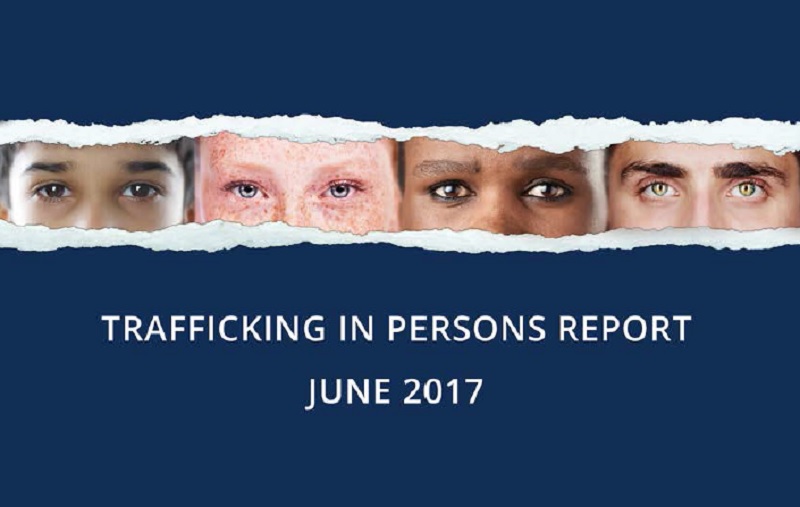 Washington, D.C./Accra, GHANA – On June 27, U.S. Secretary of State Rex Tillerson released the 2017 Trafficking in Persons Report, under the theme “Enhancing Criminal Accountability and Addressing Challenges in Prosecution Efforts.” The 2017 TIP Report includes narratives for 187 countries and territories, including the United States. The goal of the report is to stimulate action and create partnerships around the world in the fight against modern slavery.

Ghana is ranked as a Tier 2 Watch List country in the U.S. Department of State’s 2017 Trafficking in Persons Report.

In calendar year 2016, the Government of Ghana did not fully meet the minimum standards for the elimination of trafficking, but made significant efforts to do so. The Trafficking Victims Protection Act provides for a waiver to remain on the Tier 2 Watch List for a third consecutive year if the government develops a national plan of action to combat human trafficking and dedicates sufficient resources for its implementation that, when implemented, would constitute significant efforts to meet the minimum standards.

Because the Government of Ghana devoted sufficient resources to a written plan of action that, if implemented, would constitute significant efforts to meet the minimum standards, Ghana was granted a waiver from an otherwise required downgrade to Tier 3. Ghana could be subject to an automatic downgrade to Tier 3 in the 2018 TIP Report. If Ghana is downgraded to Tier 3, it will become subject to restrictions on U.S. assistance.

The TIP report’s recommendations for Ghana comprise nine goals and objectives, including:

“The Government of Ghana has taken initial steps this year to protect Ghanaian men, women and children from being enslaved. We urge the government to remain vigilant and to fully implement the new national plan of action against trafficking. When funded as promised, Ghana will be better able to prevent and prosecute trafficking and provide support services for victims of trafficking in Ghana.

“The theme of this year’s report says it all: traffickers must be held criminally accountable. Unless Ghanaians work with law enforcement and the courts to bring traffickers to justice, they will continue to commit these horrific crimes. This isn’t about what the United States wants Ghana to do. It’s about Ghanaian men, women and children who are suffering because traffickers are allowed to violate Ghana’s laws and morality.”

The U.S. government is funding several programs in Ghana to address trafficking and child labor. In June 2015, President Mahama and then-Ambassador Gene Cretz signed the Child Protection Compact (CPC) Partnership. The CPC Partnership is a jointly developed, multi-year plan aimed at bolstering current efforts of the government of Ghana and Ghanaian civil society to address child sex trafficking and forced child labor within Ghana. The Partnership awarded $5 million in U.S. foreign assistance to the International Organization for Migration (IOM) and NGO Free the Slaves to combat forced child labor and child sex trafficking in the Volta, Central, and Greater Accra regions.

Most recently, the CPC Partnership funded training for judges on adjudicating trafficking in persons cases.

In addition, the U.S. Department of Labor’s Mobilizing Community Action and Promoting Opportunities for Youth in Ghana’s Cocoa-Growing Communities (MOCA) project is providing $4.5 million to empower 40 cocoa-growing communities in the Ashanti and Western Regions to design and implement Community Action Plans (CAPs) to address child labor at the community level. Additional USDOL projects include $1.5 million to assess the prevalence of child labor in the cocoa sectors of Côte d’Ivoire and Ghana; $3 million to assess the effectiveness of interventions in these sectors; and $5 million to develop and implement strategies to reduce child labor and improve working conditions in artisanal and small-scale gold mining.

“More than 100,000 men, women, and children in Ghana are suffering in modern-day slavery,” added Ambassador Jackson. “These victims have hopes and dreams and they deserve better than to be enslaved in brothels or sold into slavery on Lake Volta for as little as the price of a bottle of schnapps. Human trafficking is a $150 billion industry and every country — including Ghana and including the United States — must do everything possible to stop this human trade.”

More about the Trafficking in Persons Report: The annual Trafficking in Persons Report fulfills a U.S. legal requirement under Section 110(b) of the Trafficking Victims Protection Act of 2000 (TVPA) that the U.S. Department of State submit an annual report to Congress placing governments on one of four tiers based on their efforts to meet the minimum standards for the elimination of trafficking in persons. The Report also contains narratives that describe the scope of human trafficking in each country, anti-trafficking efforts of each government, and discussions of important issues related to human trafficking. The goal of this report is to stimulate action and create partnerships around the world in the fight against modern slavery.

This year’s Report is the 17th installment of the report mandated by the TVPA; the Report includes narratives for 187 countries and territories, including the United States.