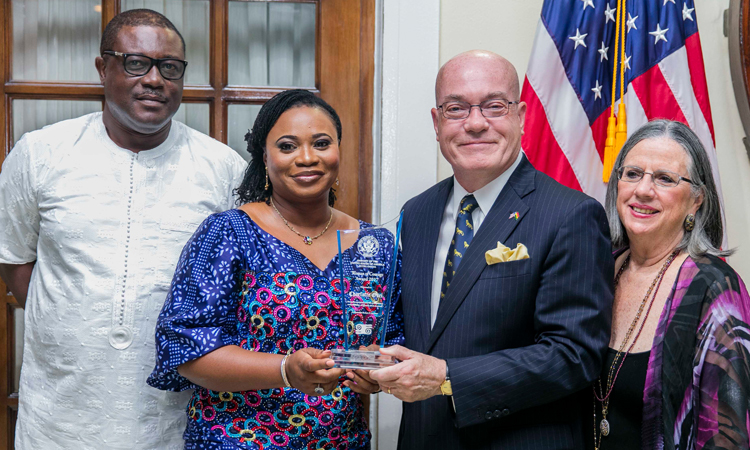 Accra, GHANA—U.S. Ambassador Robert P. Jackson presented Electoral Commission Chair Charlotte Osei with the U.S. Embassy’s Women of Courage Award on August 22, in honor of her work in managing the administration of a transparent and credible election in 2016, as well as her efforts to boost inclusion and civic engagement.  Ambassador Jackson and Ms. Osei were joined at the ceremony by representatives from the Electoral Commission, the National Commission on Civic Education, the U.S. government, members of the diplomatic community, civil society, and selected Ghanaian leaders.

At the ceremony, Ambassador Jackson praised Ms. Osei for her commitment to a democratic Ghana.  “Throughout her life, Charlotte Osei has made a name for herself as a trailblazing woman and defender of democracy,” he said.

The Ambassador recognized her for capably managing the administration of Ghana’s 2016 election despite challenges.  “Overseeing the logistics of this election was a daunting task and the stakes could not have been higher,” he said.  “Before, during, and after the 2016 election, she faced a tremendous amount of scrutiny, under which many would have buckled.  And not all of the criticism was constructive or about the political process — she faced a number of personal, base, and inappropriate attacks.  But regardless, she persisted, using her conscience, her expertise in Ghanaian law, and her determination to uphold a democratic and fair process as her guide.”

Ambassador Jackson also commended Ms. Osei for lifting up Ghana’s most vulnerable communities.  “Throughout her career, she has prioritized the active participation of vulnerable citizens.  Under her leadership, both the National Commission on Civic Education and the Electoral Commission trained hundreds of women’s groups to get out the vote, and expanded efforts to address the needs of persons with disabilities.”

While presenting this award to Charlotte Osei, he also acknowledged the many Ghanaian women who have taken a stand for strengthening democracy.  He said that they too are heroes because they exemplify the highest commitment to advance the spirit of democracy for all Ghanaians, especially women and girls, whose efforts are necessary to succeed in this critical journey.

The U.S. government works with the Ghanaian government, institutions, civil society, and communities to strengthen local governments, increase government accountability, empower vulnerable populations, and support free and fair elections.  During Ghana’s 2016 elections, USAID partnered with the Electoral Commission to increase its transparency and communication with voters, train polling agents, and ensure polling stations were accessible to voters with disabilities.