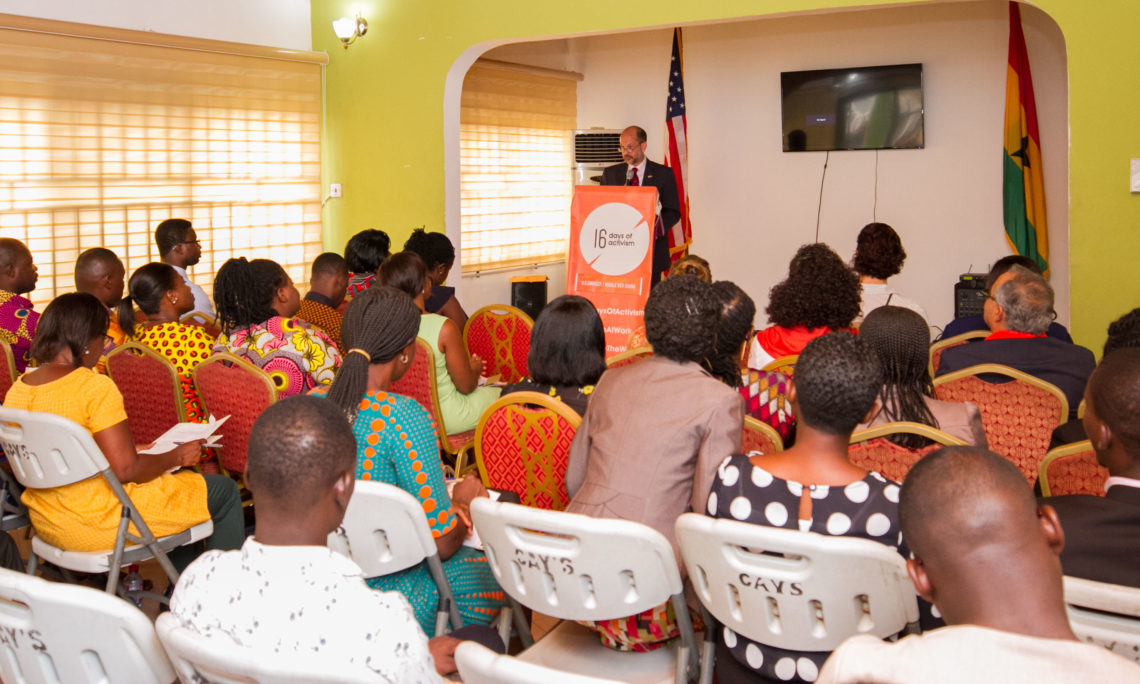 Accra, GHANA – In commemoration of the 16-Days of Activism against Gender-Based Violence (GBV) Campaign, the U.S. Embassy in Ghana partnered with Mobile Web Ghana to host an interactive workshop under the theme, “Understanding the Rights of Women and Girls.”  The event convened more than 50 stakeholders from civil society organizations, law enforcement, and diplomatic missions.  Chargé d’Affaires of the U.S. Embassy Christopher J. Lamora opened the seminar and Founder and CEO of Mobile Web Ghana Florence Toffa moderated the workshop.

The 16 Days of Activism Against Gender-Based Violence is a global campaign spanning from 25 November through 10 December, 2018.   U.S. diplomatic missions around the world will hold activities and advocacy events under the theme “#SafeAtWork: End Gender-based Violence in the World of Work.”  These efforts reaffirm the enduring U.S. commitment to preventing and responding to GBV globally and ways in which GBV limits women’s economic empowerment.

During his remarks, Charge d’Affaires Lamora spoke about the harmful consequences of gender-based violence and serves as a pervasive barrier to women’s empowerment and economic growth.  He also remarked that men also play a key role in ending GBV noting that “educating young girls is only effective if we also make it okay for boys and men to embrace gender equality and reject traditions and norms that oppress girls and women.  Empowered women need the support and advocacy of men for real change to occur.”

For more information on the U.S. Embassy in Ghana 16-Days of Activism against GBV campaign activities, visit www.facebook.com/usembassyghana.

YALI Learns Workshop on “Understanding the Rights of Women and Girls”

I’m honored to be here today to show the U.S. Embassy’s support for the annual, worldwide 16 Days of Activism against Gender-based Violence (GBV) campaign.  Whether you’re an advocate, a subject matter expert, a survivor, a family member or friend of a survivor, we welcome you to this interactive YALI Learns workshop on “Understanding the Rights of Women and Girls.”   Thank you all for joining us.

Gender-based violence has many harmful consequences. This year, the U.S. Government is highlighting ways in which gender-based violence is a pervasive barrier to women’s empowerment and economic growth.  Domestic or intimate partner violence, street harassment and violence in public spaces, and sexual harassment in the workplace all have a direct negative impact on gender equality and women’s economic empowerment.  Settings that permit such violence or harassment not only discourage women from work, but can also result in emotional or other physical trauma that render women less likely to go to work.

When women are “Safe at Work” and realizing their full potential, it generates positive dividends for society as a whole.

In her remarks at the 2017 Global Conference on Women and Entrepreneurship, former UN-Women Deputy Executive Director Lakshmi Puri stated, “If women participate in economic activity, own and control productive assets, it leads to development by helping to overcome poverty, reducing inequality, and improving children’s nutrition, health, and school attendance.”  She also noted that “there is growing global consensus on women’s economic empowerment as a force multiplier for good governance, economic growth, and poverty eradication.”

With this in mind, the U.S. Embassy is supporting economic empowerment of women through the African Women’s Entrepreneurship Program (AWEP) while also supporting law enforcement’s response in cases of gender-based violence.  Through the West Africa Regional Training Center, the United States has provided training to Ghanaian police officers on responding to domestic and other sexual and gender-based violence, as well as leadership training for women in law enforcement.

The U.S. Embassy also serves as a convener of “safe spaces.”  We provide a platform for programs in which advocates, social workers, and law enforcement specialists meet with survivors of gender-based violence and with audiences that are most vulnerable: adolescent girls and the disabled.  We rely on a network of women leaders to facilitate these sessions.  Over time, this group has evolved to become the Woke Women Task Force.  Thanks to these Woke Women, young girls and the disabled are “waking up” and learning their rights from a young age so that when they face harassment and abuse, they are equipped with the knowledge and tools to confront and prevent it.

As the acclaimed Ghanaian author Ama Ata Aidoo wrote in her novel “Our Sister Killjoy,” which I just finished reading about a month ago, women are often “victims of our history and our present.” … But they don’t have to be.  History in this area need not repeat itself.  And by ensuring that women and girls know their rights, collectively we can make important inroads towards a different future.

Yet educating young girls is only effective if we also make it okay for boys and men to embrace gender equality and reject traditions and norms that oppress girls and women.  Empowered women need the support and advocacy of men for real change to occur.

When I was in college in Washington, DC, some 30 years ago now, a male friend of mine became very attuned to this issue and decided he wanted to make a difference.  He and I were living in a house with several other students at the time, and basically, in our living room, a small, grass-roots organization was born.  Its mission was to underscore that changing the mindsets of men, and more importantly boys, was critical to ending rape.

My friend and his co-founders noted that the majority of violent acts against women are committed by men, but the vast majority of prevention efforts have historically been risk-reduction and self-defense tactics directed at women.   The founders sought to change the conversation by shifting the responsibility of deterring harm away from women by focusing on promoting healthy, nonviolent masculinity.  Their vision offered a plan for prevention that outlined positive, proactive solutions by engaging boys and men between the ages of 11 and 22 as allies, inspiring them to feel motivated and capable of ending men’s violence against women.

And they made a difference, increasingly so as the organization’s size and reach grew.  Over the past three decades, the group has expanded to reach over two million boys and men across the United States and elsewhere.  Have this organization and other like-minded organizations successfully put an end to all sexual and gender-based violence in my country?  Of course not.  But they’ve changed mindsets, behaviors, and quite possibly lives.  So this sort of effort, in my view, must go hand-in-hand with the very critical assistance we provide to women.  Only when men and women are fully committed to partnering on this effort will we make real, long-term progress.

Here in Ghana, the U.S. Embassy partners on anti-gender-based violence programming and advocacy across all sectors, including with government officials at the Ministry of Gender, Children and Social Protection, law enforcement from the police and the Domestic Violence Victims Support Unit (DOVVSU), lawyers and human rights advocates, health workers, and a wide range of civil society organizations and volunteers.

For example, Mobile Web Ghana is hosting today’s YALI Learns workshop.  The Director and CEO of Mobile Web Ghana, Florence Toffa, is a public health specialist and anti-GBV advocate.  Under her direction, Mobile Web Ghana trains youth and women in mobile entrepreneurship.  We’re proud that Florence is an alumna of the Mandela Washington Fellowship in addition to being an active member of the Woke Women Task Force.  Thank you Florence and the entire Mobile Web Ghana team for hosting us today.

The United States is committed to promoting gender equality and advancing the status of women and girls around the world.  We know that gender-based violence is a global challenge that crosses borders and cultures.  Preventing and responding to violence against women and girls requires all of us to take action—governments, individuals, the private sector, and civil society.

We look to Ghana, a leader in Africa on so many things, to support efforts to keep girls in school and to support women in realizing their full potential, allowing them to contribute to peaceful and prosperous communities, and to the country as a whole.  On this point, I note that President Akufo-Addo was named the Chairperson for the African Union’s Committed on Gender and Development in 2017 and has since launched the Gender and Development Initiative for Africa to promote gender equality in the workplace.  We applaud this development and stand ready to partner with Ghana and other African nations to support such initiatives.

In closing, I’ll borrow the theme from the Woke Women Task Force: “Empowered females make our world better.”  I know that today’s YALI Learns workshop will contribute to this ideal of empowering women for a better world.   Thank you.