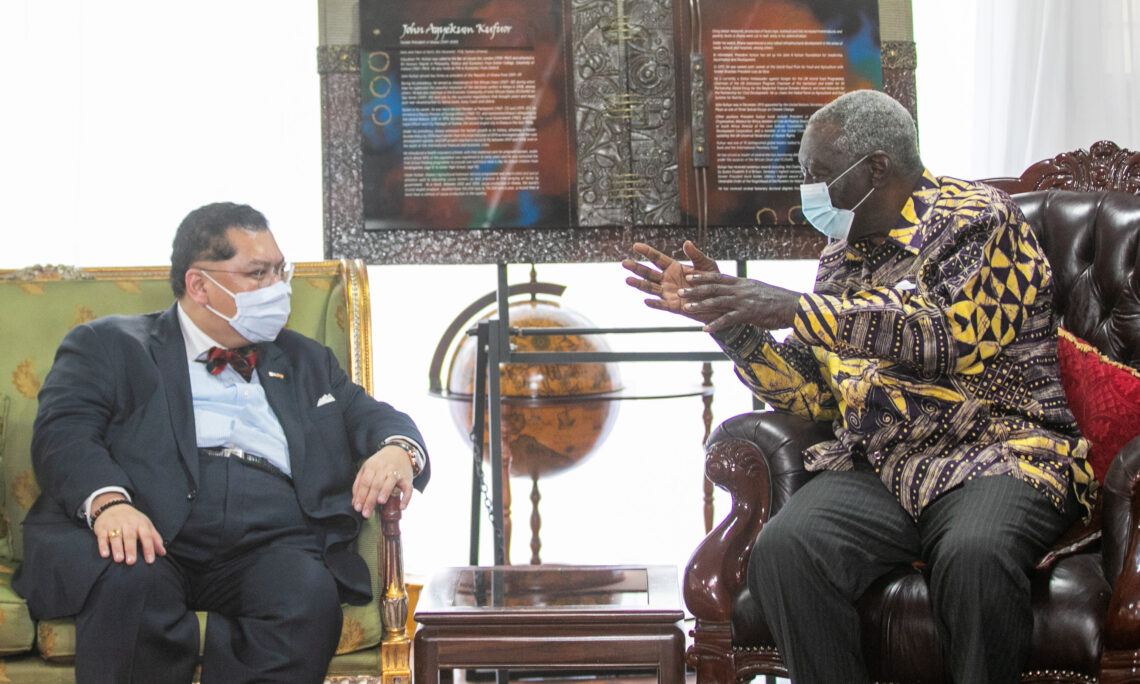 U.S. Special Envoy for the Sahel Region Ambassador Pham’s trip to Accra signals the United States’ strong partnership with the government and people of Ghana to advance shared prosperity in both countries.  “The United States values Ghana’s democratic, security and economic leadership in the region and throughout Africa,” notes Ambassador Pham.

In addition to inauguration-related events, Ambassador Pham met with President Akufo-Addo at Jubilee House, where he reaffirmed the strong U.S.-Ghana partnership in the areas of regional peace and security, economic development, and accountable governance.  Ambassador Pham also paid a courtesy call on former President John Kufuor.

During his visit, Ambassador Pham toured the National Border Fusion Center and discussed the U.S.-Ghana Security Governance Initiative (SGI) partnership.  Supported by U.S. Customs and Border Protection with State Department funding and inaugurated in January 2020, the National Border Fusion Center is an SGI flagship project and serves as an information-sharing hub for border security to facilitate informed, rapid decision making.

Following the tour, the U.S. Special Envoy visited Burma Camp where he met with Chief of Defense Staff Lieutenant General Obed Boamah Akwa and other senior members of the Ghana Armed Forces (GAF) to discuss Ghana’s important role in regional security through peacekeeping contributions and maritime security.  They also discussed concerns over the spread of violent extremism in the Sahel and agreed to work collectively to combat the growing threat.  Following the meeting with the GAF, the U.S. Special Envoy visited the Kofi Annan International Peace Training Centre (KAIPTC) where he met with the center’s leadership and staff to discuss research and academic programs focused on the drivers of violent extremism in the ECOWAS sub-region.

Dr. J. Peter Pham was appointed the first-ever United States Special Envoy for the Sahel Region of Africa on March 1, 2020. The President accorded him the personal rank of Ambassador on September 29, 2020.

Ambassador Pham is responsible for coordinating America’s engagement with international and regional partners, including the G5 Sahel and ECOWAS member states, to address the threat from Violent Extremist Organizations (VEOs) and prevent the VEO threat from impacting additional areas, as well as supporting the implementation of the Algiers Accord and regional efforts to stabilize the tri-border region of Mali, Burkina Faso, and Niger.

Ambassador Pham previously served from 2018 to 2020 as U.S. Special Envoy for the Great Lakes Region of Africa. Prior to his appointment to the State Department, Dr. Pham was Vice President and Director of the Africa Center at the Atlantic Council. He was previously Senior Vice President of the National Committee on American Foreign Policy, and Editor of its bimonthly journal, American Foreign Policy Interests. He was also a tenured Associate Professor of justice studies, political science, and Africana studies at James Madison University in Harrisonburg, Virginia, where he was also Director of the Nelson Institute for International and Public Affairs. Dr. Pham is the author of more than 300 essays and reviews and the author, editor, or translator of over a dozen books, primarily on African history, politics, and economics.

From 2008 to 2017, Dr. Pham was Vice President of the Association for the Study of the Middle East and Africa (ASMEA), an academic organization which represents more than 1,300 scholars of Middle Eastern and African Studies at more than 300 colleges and universities in the United States and overseas. In 2015, the Regents of the Smithsonian Institution elected Dr. Pham to the Board of the National Museum of African Art, of which he is presently Vice-Chair.

Dr. Pham holds a B.A. in economics from the University of Chicago and a doctorate from the Gregorian University, as well as postgraduate degrees in history, law, international relations, and theology.