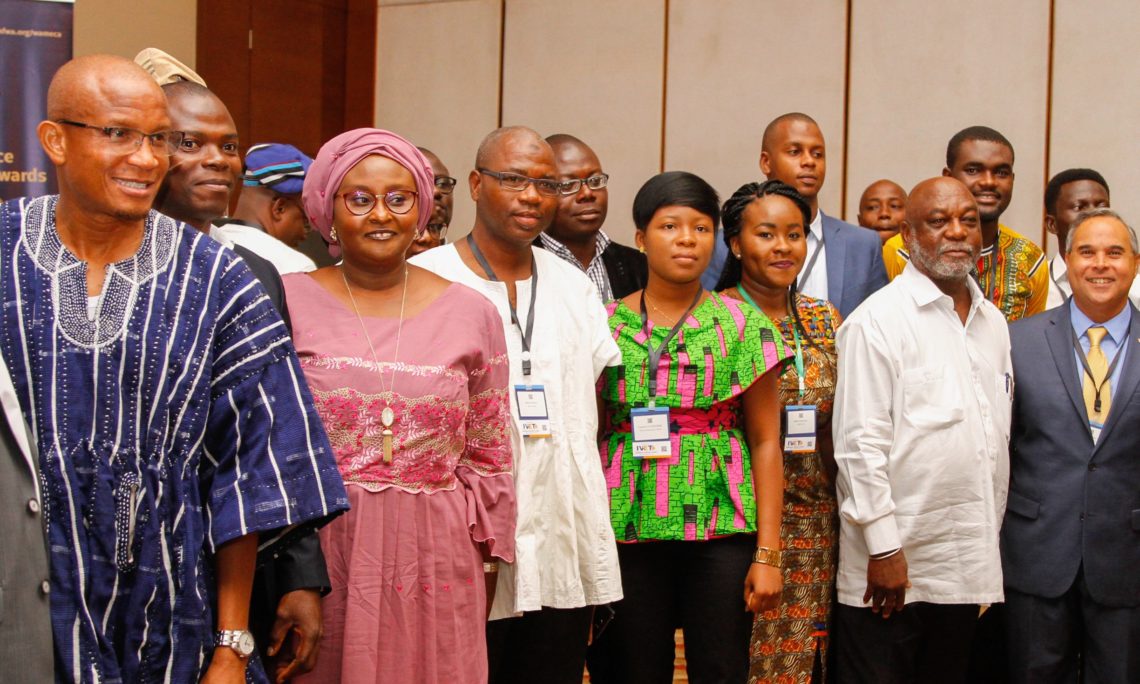 Minister of Information Hamid and PAO Quiroz with Participants

On October 27, the U.S. Embassy joined journalists from across the region in participating in the West Africa Media Excellence Conference. The event was attended by Ghana’s Minister for Information, the Honorable Mustapha Hamid; the Minister for Information and Communications Infrastructure for the Gambia, the Honorable Demba Ali Jawo; Ms. Sophie Ly Sow of the Media Foundation for West Africa board of directors; MFWA Executive Director Sulemana Braimah; U.S. Embassy Public Affairs Officer Roberto Quiroz II; and other distinguished guests.

In his remarks, Minister Hamid said that the Government of Ghana is committed to freedom of the press as essential to strengthen democracy, adding: “Thanks to the media — including in social media — justice campaigns have made a difference. The media impacts life, and development is tied to democratic freedom. Some people have received a second chance in life not possible without the opening of the media space.” He noted that the media must highlight corruption cases, and urged Ghanaian journalists to maintain “standards of excellence” through facts and evidence-based journalism.

In his remarks, Mr. Quiroz lauded the Conference for bringing together journalists from the region and underscored the United States’ support for freedom of the press. “All of you represent the greatness of sovereign African nations with a united vision meeting here in Ghana. That is very special, especially as you honor journalists. It is an honor to be here today to underscore once again America’s commitment and belief as a core principle enshrined in our Constitution and Bill of Rights for freedom of the press. As Ambassador Robert P. Jackson has reaffirmed here in Ghana, we highlight the essential role that a free press plays in strengthening not only American democracy, but Ghanaian democracy,” he said. Read the full text of Mr. Quiroz’s remarks below:

Thank you Honorable guests;
Minister for Information of the Republic of Ghana, the Honorable Mustapha Hamid;
Minister for Information and Communications for the Gambia, the Honorable Demba Ali Jawo;
Ms. Sophie Ly Sow, from the Media Foundation for West Africa board of directors;
Media Foundation for West Africa Executive Director Sulemana Braimah;
Distinguished members of the media;
Ladies and gentlemen,

All of you represent the greatness of sovereign African nations with a united vision meeting here in Ghana. That is very special, especially as you honor journalists. It is an honor to be here today to underscore once again America’s commitment and belief as a core principle enshrined in our Constitution and Bill of Rights for freedom of the press.

As the United States has said before, and Ambassador Robert P. Jackson has reaffirmed here in Ghana, we highlight the essential role that a free press plays in strengthening not only American democracy, but Ghanaian democracy. We have seen the struggles of journalists in other nations, and yet together they advance democracy in Africa and every nation. Former President Obama said here in Accra in 2009 that Africa needed strong institutions, and not strong men, to flourish. The media is an essential and key institution we all must strengthen each day.

When people around the world point to Ghana as a successful democracy, they need not look further than Ghanaian journalists and citizens to give them real credit for the state of your democracy. Telling the story is perhaps one of the most awesome of responsibilities, and journalists are entrusted by us to do that.

I recall that in other nations young people would say “we want to be like Ghana because Ghana has advanced greatly and we can learn from their example.” Those words are something to be proud of.

A free media, thanks to journalists dedicated to their profession as a vocation, share light on issues of public concern. Journalists do not always earn high salaries, but they truly transform societies. We honor especially women journalists whose efforts exemplify the fact that we must empower all women and girls to truly promote development in all nations.

True journalism is facts based, and investigative journalists inform the public through their work of relevant issues on good governance and transparency, not just as related to the governments they report on, but also how private organizations handle public funds. Investigative journalists — who must be free to pursue their profession without fear or intimidation, arrests or harassment — remind us that public service is a sacred duty to serve citizens, not a venue for individual profit, fame, or fortune. Investigative journalists raise the uncomfortable questions that at times must be raised, and by doing so they make nations like Ghana freer, stronger, and democratically vibrant shining as examples to other nations.

Perhaps more importantly, investigative journalists are not supposed to be cheerleaders for the state or public officials. Their patriotism is not measured by how they support governments, it is measured by how they inform the public, encourage us not to be satisfied with the status quo, but to identify in our midst the issues that threaten to unravel our achievements as democracies up to date.

How proud we are that many of you here today will be recognized tomorrow at an awards ceremony in a program the U.S. Embassy is honored to sponsor. You have identified the scourge of human trafficking — modern day slavery, corruption, gender issues, and others as remaining obstacles that affect Ghanaians. In fact, those are challenges we all must meet together in Ghana, America, and around the world to build a better and more just future for our youth, who will assume leadership in all sectors.

Here in Ghana I have been impressed by how vibrant and free debates are on the radio and television, as well as in social media. People ask questions, hold leaders accountable, never seem satisfied with the status quo, nor should they, and they believe that they all have a role to contribute to their nation. Yes, they do.

Thanks to all journalists for giving Ghanaians a forum to become active participants in the democratic process. Journalists and citizens here in Ghana prove that democracy is not a western model. It works here in Ghana, and it is proudly African democracy.

Let us consider your colleagues in other nations who remain under pressure or worse for telling the story. Censorship, limitations, arrests in the dark of night, torture, absence of justice, attempts to bribe journalists who do not compromise their integrity or the facts; those are some of the many challenges journalists face around the world.

So, once again, I want to thank the journalists here today, and credit each of you for strengthening this nation as a role model in media freedoms. Together, the United States shares your commitment to further tackle the remaining challenges to truly lift Ghana up to greater heights of peace and prosperity, and it all begins with you, with your telling of the stories to inform the public to make life better and more just in Ghana, in this region, as in the rest of the world.

Can you make this vision a reality as individual journalists? Yes, you can! And America stands with you!