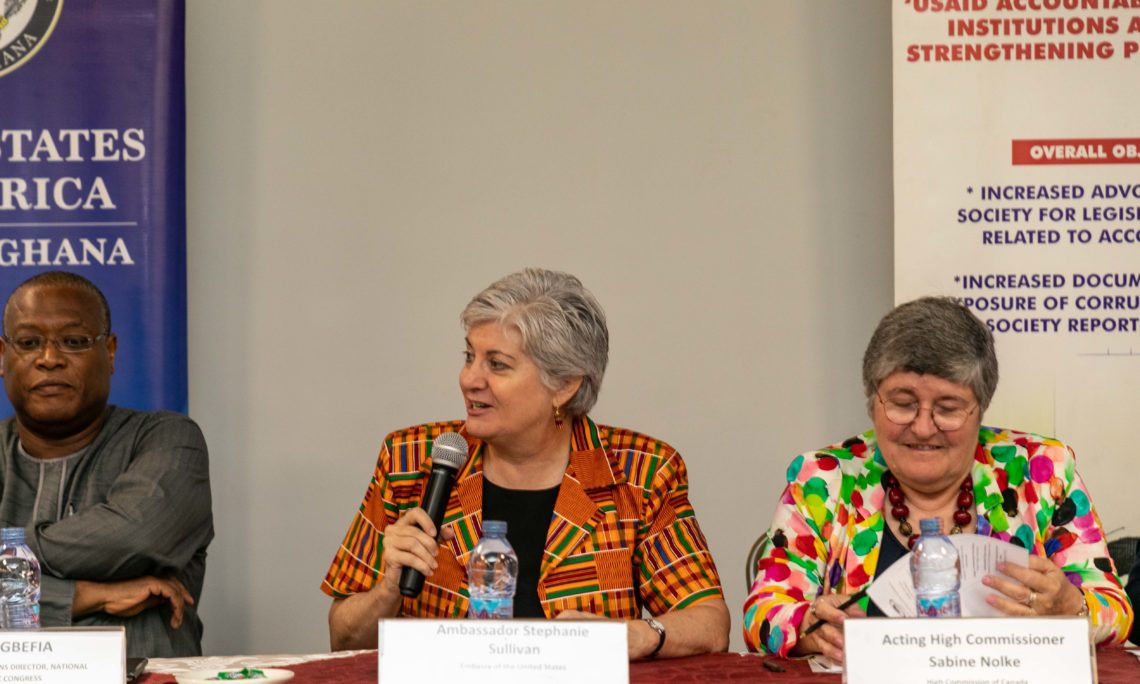 Accra, Ghana – On December 12, 2019, U.S. Ambassador Stephanie Sullivan joined representatives from the New Patriotic Party, the National Democratic Congress, Government of Ghana, civil society, youth leaders, and members of the diplomatic corps from Canada, Denmark, the Netherlands, the European Union, and the United Kingdom, in observing the 2019 International Anti-Corruption Day in Accra.

Speaking about efforts to reduce corruption at the event, Ambassador Sullivan noted: “Corruption is not a victimless crime.  It steals directly from the pockets of citizens… Progress has to be made on several fronts simultaneously: end impunity, reform public administration and financial management, promote transparency and access to information, and empower citizens to demand accountability from public officials.  Ultimately, it’s about ensuring that government at all levels is responsive to its citizens.”

The International Anti-Corruption Day forum highlighted in practical terms what Ghana and other nations lose as a result of corruption.  By bringing together a broad range of stakeholders, the forum aimed to increase public and political party engagement on anti-corruption in a way that promotes public accountability.  Through dialogue, forum participants focused on approaches to increase national interest and engagement on corruption as a principal topic for the 2020 presidential and parliamentary elections, develop cooperation among actors to fight corruption in Ghana, and provide actionable suggestions to fight corruption to advance Ghana’s journey to self-reliance.

Ambassador Sullivan’s As Prepared Remarks
at the “The Cost of Corruption: Deliberations for Remedy” Event
December 12, 2019, 9:00 – 12:00 p.m.
Fiesta Royale Hotel

Member of Parliament for Adenta and
Director of Communication for the National Patriotic Party (NPP) Mr. Yaw Buaben Asamoah;
Director of International Relations for the
National Democratic Congress (NDC)
Mr. Alex Sagbefia;
Civil society representatives;
Heads of Mission and other colleagues
from the diplomatic corps;
Ladies and gentlemen,
All protocols observed.

Good morning!  I’m pleased to join you at today’s event, “The Cost of Corruption in Ghana: Deliberations for Remedy.”  December 9 was International Anti-Corruption Day, but the topic is of such importance that one day is not enough.  In fact, the African Union devoted 2018 as the Year of Anti-Corruption.  Clearly, though, one year is not enough to overcome human nature. Corruption is a global problem, and people everywhere do what they think they can get away with.

For example, if I thought I could get away without paying my yearly taxes, I might be tempted. But I firmly believe that if I did not pay my taxes, I would get caught, with serious consequences such as losing my job, and maybe even going to jail,so I don’t even have the debate in my head. Bottom line: strong enforcement leads to strong compliance.

I’m especially pleased to be joined by representatives of Ghana’s two main political parties, the NPP and NDC, which have each spoken out against corruption over the years.  Mr. Asamoah and Mr. Sagbefia, I welcome your thoughts – and those of all of today’s participants – on how better deter corruption. As Ghana prepares for parliamentary and presidential elections next year, I encourage you to take advantage of the opportunity for public debate on effective measures against corruption. Corruption is not a victimless crime, but is “stealing directly from the pockets of citizens.”

Globally, corruption costs 5% of GDP.  Corruption increases the cost of doing business and reduces investment in countries perceived to be relatively more corrupt.  Under the Foreign Corrupt Practices Act, American companies are forbidden from engaging in bribery and corruption under penalty of our laws, which are rigorously enforced.   Therefore, American companies look to bring foreign investment that creates jobs and contributes to economic growth to countries where they can operate ethically. Corruption also enables illicit activities: West Africa loses $1.95 billion U.S. dollars each year due to the illicit trade in fisheries and other marine resources. Illegal mining, logging, and wildlife trafficking cost nations and citizens even more.

Yet, how do we define corruption?  Without dissipating our energies on semantic exercises, let me cite a few concrete examples of corruption:

We all know there is no magic bullet to fight corruption.  Every citizen can participate in reducing the corruption which can hinder national development and pose a serious threat to public safety.  Progress needs to be made on several fronts simultaneously: ending impunity, reforming public administration and financial management, promoting transparency and access to information, and empowering citizens to demand accountability from the officials who represent and serve them.  Ultimately, it’s about ensuring that government at all levels is responsible to its citizens.

To that end, the United States – through the U.S. Agency for International Development (USAID) – has supported the Accountable Democratic Institution Systems Strengthening (ADISS) Activity since 2015.  Implemented by the Ghana Integrity Initiative (GII) Consortium – the organizers of today’s forum – ADISS created a network of local civil society organizations to combat corruption by working with local assemblies to follow up on the recommendations of the Auditor General on district assemblies’ financial statements.   At the national level, ADISS worked toward the passage of key legislation, including the Right to Information Act and the Public Financial Management Regulations.

The most meaningful and sustainable efforts will be the implementation of Ghanaian solutions to Ghanaian challenges, without fear or favor.

As we discuss in our small groups following this panel, we ask you to not to “admire the problem” but to deliberate on what’s working well, what can be strengthened, and how, and what additional, actionable measures can be put in place going forward.  Finally, we applaud Ghana’s establishment of frameworks to address corruption, both big and small, and pledge our support for such efforts, so that Ghana may complete its journey to self-reliance, reducing corruption at all levels is a key step along that path.