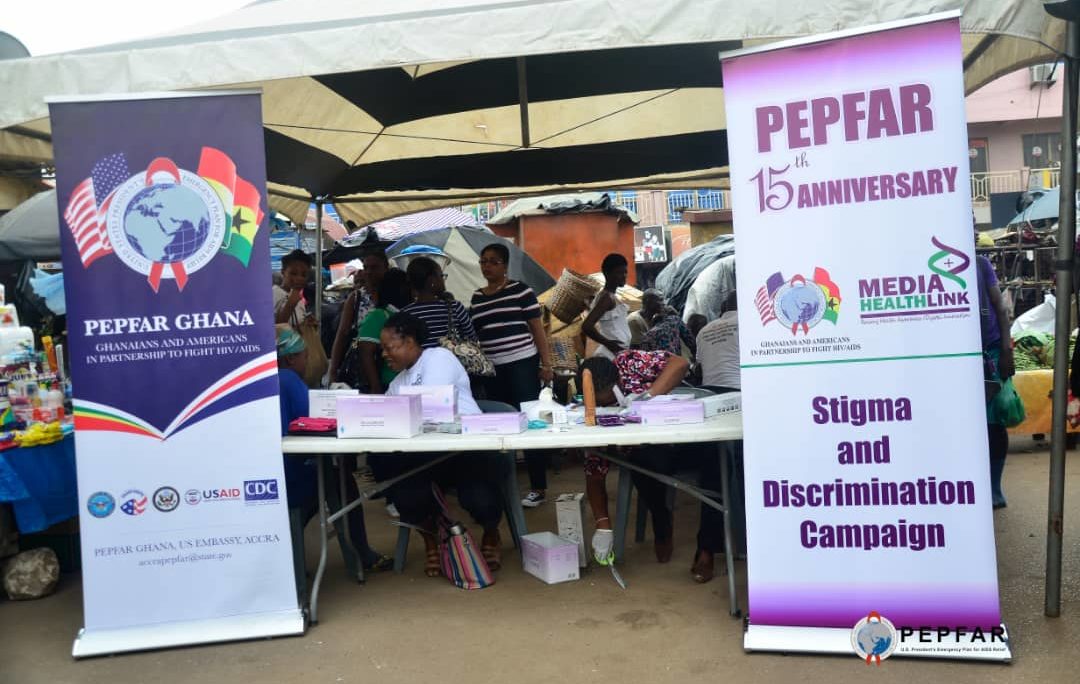 PEPFAR at 15 Outreach in Kumasi

November 30, 2018 – The United States of America, through the U.S President’s Emergency Plan for AIDS Relief (PEPFAR) celebrates fifteen (15) years of the U.S.-led global initiative under the theme “Saving Lives through American Generosity and Partnerships.”  In the lead up to World AIDS Day 2018, the U.S. Embassy in Ghana joined Government of Ghana partners and civil society organizations to commemorate the tenth anniversary of PEPFAR in Ghana through an anti-stigma and discrimination campaign.  The campaign underscores the U.S. Government’s commitment to eliminate this major barrier in order to achieve the UNAIDS FastTrack Goal of 90-90-90 in Ghana – 90% of the population tested, 90% of those HIV positive on treatment, and 90% with suppressed viral loads – and usher in an AIDS-free generation by 2030.

Together with the Ghana AIDS Commission (GAC) and partners such as the Heart-to-Heart HIV Ambassadors, anti-stigma and discrimination campaign activities took place in the Ashanti, Western, and Volta regions.  Activities included workshops with hospital caregivers, information sessions at senior high schools, and free-HIV screenings and counseling at central markets.  As a result, hundreds of caregivers received sensitivity training, thousands of students participated in anti-stigma activities, and over 700 people received free HIV-screening and counseling across the three regions.

In partnership with the Africa Center for Development Reporting, the U.S. Embassy also funded and hosted a workshop for health journalists on HIV and AIDS reporting in the Volta Region.  Twenty media practitioners discussed the important role of the media to responsibly report and raise awareness about Ghana’s HIV and AIDS response.

The campaign will culminate during the World AIDS Day 2018 celebration in Ho, Volta Region on Saturday, December 1, 2018.  Chargé d’affaires Christopher J. Lamora will give remarks during this annual celebration along side high-level representatives of the Government of Ghana, UNAIDS, UNICEF, and PEPFAR partners.

Since the launch of PEPFAR in 2003, the U.S. Government has invested over $80 billion in the global HIV/AIDS response – including through U.S. bilateral HIV and tuberculosis efforts as well as contributions to the Global Fund to Fight AIDS, Tuberculosis and Malaria.  This represents the largest commitment made by any nation to address a single disease.

According to UNAIDS, AIDS-related deaths globally have been cut in half since their peak in 2004 and new HIV infections have been reduced by 47 percent since 1996.  In Ghana, through PEPFAR’s financial support, technical assistance and close partnership with the Ghana AIDS Commission, the National AIDS Control Program, and civil society organizations, 28,000 HIV positive Ghanaians will receive treatment this year.

Thanks to the leadership of the United States, working with partners around the globe, PEPFAR has transformed the global HIV/AIDS response and helped make the world a more secure place, better able to respond to the global health threats of today and tomorrow.  For more information, visit www.PEPFAR.gov.