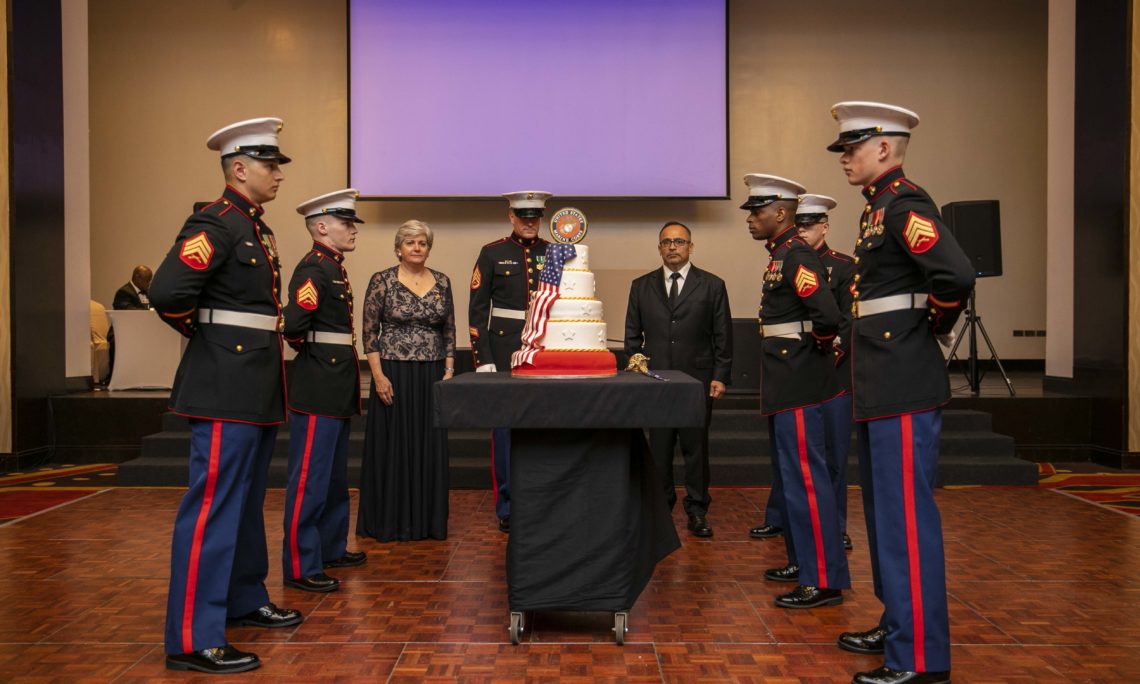 Ambassador of the Arab Republic of Egypt, Mr. Emad Hanna

Other members of the diplomatic corps;

Distinguished invited guests from the Government of Ghana and all sectors;

All Marines joining us tonight;

I am pleased to join you all tonight to honor the United States Marines on this, their 244th birthday.  We heard the message from Commandant of the Marine Corps, General David H. Berger, and reaffirm our appreciation to all Marines, past and present, for their service.  We are awed by the bravery of the Marines throughout America’s history.  In my over thirty years of service as a U.S. diplomat, I have seen firsthand how Marine Security Guard detachments form an integral part of the communities of U.S. Embassies and Consulates around the world, including here in Accra.

As Secretary of State Mike Pompeo has said, “The Marine Corps and the Department of State share a long history and have forged one of the most important and enduring relationships that exists between two U.S. government entities.” So what makes a Marine, and what motivates young men and women from our nation to join the Corps?  For those of us who have not been Marines, let’s imagine what their experience must be like on their first day of service. Imagine you are on a Greyhound bus.

For our Ghanaian guests, that is an American version of the Intercity Bus.  This bus ride is no ordinary journey, as the final destination is Marine Corps Recruit Depot in Parris Island, South Carolina or Marine Corps Recruit Depot, San Diego.  It sounds nice, right? … island living… a beach perhaps…but I assure you, even if their minds are wandering, they know this is no holiday.  The bus buzzes with young men and women from America’s diverse regions and backgrounds – from the North, South, East, West, Pacific, Caribbean, and yes, – even permanent resident immigrants – they all volunteer to serve and defend the United States.

All of them have different personality types: The high school star athletes, the gamers, the farm hands, the studious types, the social media socialites, the introverts, city slickers, and the attention-seeking boasters.  They share a common exhilaration – and yes, some amount of fear – about the unknown they are about to experience, even though war movies have revealed much about Marine boot camp.  They have seen films depicting the reveille calls at “zero dark hundred,” the grueling exercises, the demanding drill instructors, the rigid mealtimes, and even the infamous cleaning of floors and restrooms with toothbrushes.

Yet no one knows what the near future will be like, and some self-doubt must creep in about whether they have the stamina to endure what they imagine to be a tough and seemingly endless 13 weeks.  There will be no vacations during that period, no weekends, no alcohol, no parties, no Mom and Dad, no dates with significant others, no rest except when they go to sleep, and even that will be rigidly instructed.

Fear and maybe a bit of curiosity stimulates nervous conversation among the passengers.  “Where are you from? Why did you join the Corps?”  As the bus nears its destination it grows unusually silent, until the only sound the recruits hear is the wheels coming to a stop in front of a line of drill instructors (or D.I.s) with their famous “Smoky the Bear” hats.  Now the recruits can hear only their pounding hearts until a D.I. thunders into the bus to welcome them to boot camp.

Many face some fear at that very moment.  “Fear of what?” you might ask.  Fear of death?  Perhaps, but then why join the service known as the “First to Fight?”  The graves of our courageous Marines can be found around the globe, from Belgium and France to Libya, to Panama and the Philippines.  For the last half-century, our brave Marines have all been volunteers who demonstrated their willingness to sacrifice by signing on the dotted line, and then giving nothing less than their all.

Fear of failure?  The fear of dropping out of basic training and disappointing oneself and loved ones causes anxiety in most recruits, although statistics tell us that nine out of ten will push through the crucible to become Marines.

All that is soon to change when the first Drill Instructor climbs aboard and shouts that they have 60 seconds to collect all their belongings and GET OFF!  They might wish they could invoke sankofa at that moment. In fact, I actually got to experience a taste of these first steps in becoming a Marine as part of my War College experience in 2005, when we boarded a bus to Parris Island to see “where they make Marines.” The Drill Instructor indeed yelled at us as soon as we arrived, and continued to do so as we lined up on the famous yellow footprints.

From that instant forward, Marine recruits learn how to do everything, big and small, with efficiency, purpose, and resolve.  Discipline.   They learn to live and breathe the concepts, “One Team, One Mission,” “One Wins, All Win,” and “Leave No One Behind.” Discipline is defined as the ability to control oneself and others, even in difficult situations.  What better way to describe the Marine ethos?  Discipline determines the success or failure of our relationships.  Strong marriages demand disciplined focus on each partner’s emotional, spiritual, and social needs.  Raising well-adjusted children requires a consistent parenting borne of discipline.  Institutions derive their strength from disciplined adherence to established standards and norms.  Bilateral relations flourish under a disciplined respect for the art of diplomacy advancing not only America’s but our mutual interests to strengthen prosperity, security, and democracy.

Discipline allows us to resist temptation.  Temptation to allow our emotions to override our reason.  Temptation to give in to group pressure, partisanship, nepotism, hubris or vengeance.  Temptation to be complacent, to do just average work while expecting to be rewarded and applauded for giving minimal effort.

It takes discipline to:

– set a development goal and bring it to fruition.

– make a visa decision based on the law and not on our biases.

– keep our warehouse organized and our inventory up-to-date.

– document exemplary performance and give credit where it is due.

– be good stewards of every one of our taxpayer’s dollars.

– organize an event like tonight’s and get every detail just right.

All these things also take love of country and patriotism,which the Marines have in abundance.  I’d like to take this opportunity tonight to commend our disciplined and patriotic detachment of Marines and their Detachment Commander, Staff Sergeant Kyle Martin, for their selfless dedication to our mission and service to America. We appreciate their vigilance at the nerve center we call “Post One” and that of the other men and women who staff “Post One” elsewhere as well, 24 hours a day, seven days a week.

To all those in uniform here tonight, thank you for your service.  In fact, will all active duty and veterans from all branches of the U.S. armed forces please rise to be recognized?Thank you for your service!  Active duty members and veterans of Ghana’s armed forces, please stand. Let us also recognize all of our employees of U.S. Mission Accra, Ghana – direct hire, locally employed staff, contractors, eligible family members, representing more than a dozen agencies. I would also like to recognize our Peace Corps Volunteers and Returned Peace Corps Volunteers for their commitment to the people of the United States and their country of service.

For the Marines here tonight, and I’ve learned there is no such thing as a “former” Marine, on this 244th Anniversary of the Corps, know that whatever your future plans, you have been given a precious gift – you have mastered discipline, the key to untold success.  As famed Drill Instructor R. Lee Ermey said, “Without discipline, there is no Marine Corps.”  Thankfully, at our Embassies, we have both.  And we, America, and Ghana are better for it.

May God always bless the Marines, and the United States of America. Happy birthday, Marines.