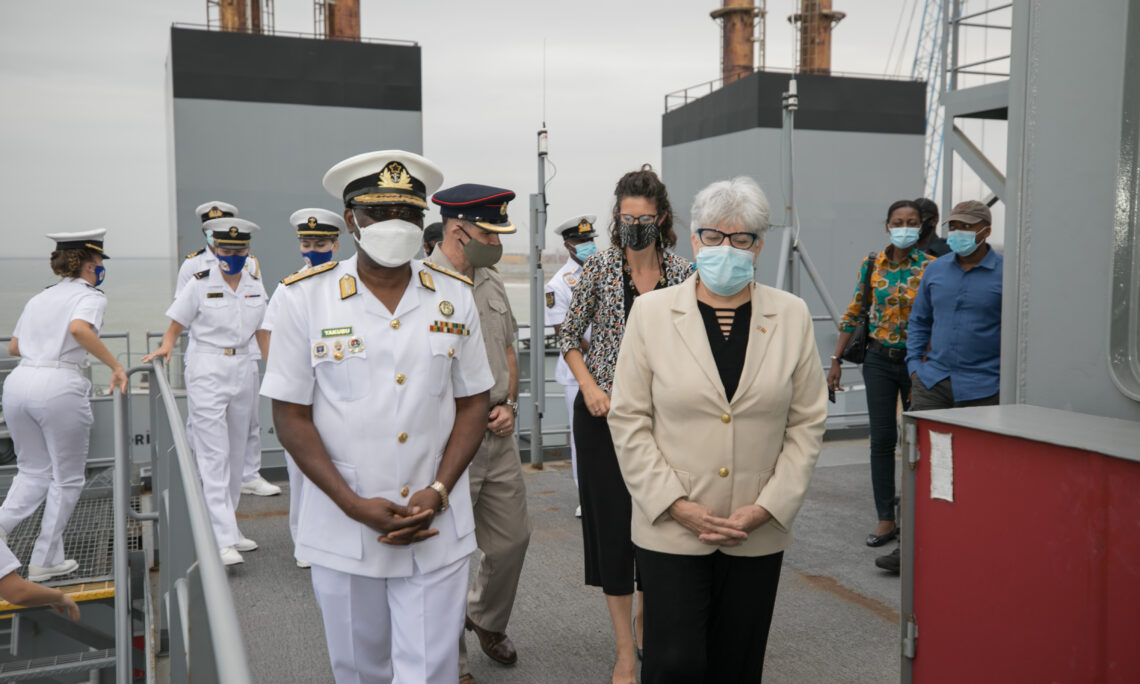 USS Hershel “Woody” Williams is the first warship permanently assigned to the U.S. Africa Command area of responsibility. The U.S. shares a common interest with African partner nations in ensuring security, safety, and freedom of navigation on the waters surrounding the continent, because these waters are critical for Africa’s prosperity and access to global markets.

The ship is a highly flexible platform that may be used across a broad range of military operations. Acting as a mobile sea base, it is part of the critical access infrastructure that supports the deployment of forces and supplies.

Earlier this month, members of Ghana’s Special Boat Squadron joined the crew on the Hershel “Woody” Williams to participate in a maritime security capabilities exercise with partners in the Gulf of Guinea.

“It was great having our Ghanaian embarkees aboard to interact with the crew, and to participate in the maritime security capabilities exercise we conducted,” Capt. Chad Graham, commanding officer, USS Hershel “Woody” Williams, said. “In-person interactions like this go a long way toward solidifying national partnerships, and we look forward to building on our two navies’ relationship in the future.”

Midshipmen from the U.S. Naval Academy, who are studying abroad this semester at the University of Ghana, also participated in the ship visit as a part of a larger Women, Peace, and Security (WPS) initiative led by the Commander, Naval Forces Europe-Africa (NAVEUR-NAVAF). While in Ghana, the students learned about the Ghana Armed Forces’ ongoing Gender Advisor Initiatives and participated in community relations activities led by the University of Ghana and the U.S. Embassy.

“Having future naval officers visit our ship affords them an opportunity to have real-world exposure to the international importance of their service, and the focus on the WPS initiative allows us to learn how we can better foster opportunities for women leaders within that service,” Graham said.

For over 70 years, U.S. Sixth Fleet forces have forged strategic relationships with our allies and partners and solidified a foundation of shared values, experiences, and vision aimed at preserving security and stability.

U.S. Sixth Fleet, headquartered in Naples, Italy, conducts the full spectrum of joint and naval operations, often in concert with allied and interagency partners, in order to advance U.S. national interests and security and stability in Europe and Africa.